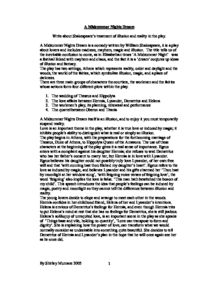 A Midsummer Nights Dream Write about Shakespeare's treatment of illusion and reality in the play. A Midsummer Nights Dream is a comedy written by William Shakespeare, it is a play about lovers and includes madness, mayhem, magic and illusion. The title tells us of the inevitable confusion to come, as in Elizabethan times 'A Midsummer Night' was a festival linked with mayhem and chaos, and the fact it is a 'dream' conjures up ideas of illusion and fantasy. The play has two settings, Athens which represents reality, order and daylight and the woods, the world of the fairies, which symbolize illusion, magic, and a place of darkness. There are three main groups of characters the courtiers, the workmen and the fairies whose actions form four different plots within the play. 1. The wedding of Theseus and Hippolyta 2. The love affairs between Hermia, Lysander, Demetrius and Helena 3. The workmen's play, its planning, rehearsal and performance 4. The quarrel between Oberon and Titania A Midsummer Nights Dream itself is an illusion, and to enjoy it you must temporarily suspend reality. Love is an important theme in the play, whether it is true love or induced by magic; it inhibits people's ability to distinguish what is real or simply an illusion. ...read more.

She is awoken by the sound of Bottom's singing and she tells him 'mine ear is much enamoured of thy note'; 'so is mine eye enthralled to thy shape'; she believes she is in love with Bottom, who has been 'translated' and has the head of an a*s; he looks quite 'monstrous', it is absurd but very funny. Bottom's transformation into an a*s, is ironic as he behaves like an a*s throughout the play, but his transformation seems to make him speak more sense. He is obviously surprised by Titania's words of affection and replies 'Methinks, mistress, you should have little reason for that': and to say the truth, reason and love keep little company together nowadays'. This comment reflects what is happening in A Midsummer Nights Dream. In the woods Puck mistakenly places the love juice in Lysander's eyes when he awakens he declares his love for Helena, denying he ever truly loved Hermia, 'The tedious minutes I with her have spent'. 'The will of a man is by his reason swayed'; Lysander is implying he had 'no reason' when he loved Hermia, this is ironic as he is under the influence of the love juice, and the reality is, he has no reason to love Helena. ...read more.

Shakespeare's treatment of illusion and reality throughout the play is in my opinion quite genius. His use of language throughout the play is very important, as in Elizabethan times they had few props, so he used language to create an effective illusion. The fairies speak in light rhymed verse, which is very descriptive: 'Over hill, over dale Through bush, through briar Over park, over pale Through flood, through fire'. I wander over every place Swifter than the moon through space. This gives the impression they are light, fast, and magical. This is a complete contrast to the workmen they use prose; they speak commonly and in ordinary sentences which indicates their low status. This contrast in the use of their language shows their differences, the fairies are magical and the workmen ordinary just like their speech. Puck speaks in rhyming couplets, which shows his mischievous nature. The courtiers, Oberon, Titania, Theseus and Hippolyta speak in blank verse which signifies their high status. Shakespeare also uses language to create imagery, 'Nodding violet grows', this suggests the nodding violets 'lulled' Titania to sleep; this imagery helps us to actually picture the scene in our heads. The fairies describe 'The cowslips tall', this description helps us realise just how tiny they are, and the scale of fairyland. Oberon's describes 'a little western flower', 'Before, milk-white, now purple with love's wound'. Oberon's elaborate use of language transforms a simple flower into something beautiful and magical. ...read more.

The writer has presented a range relevant of ideas related to the question of illusion and reality in the play. However, the effectiveness of the essay is reduced by its rambling structure. The reader is not guided through, and shown how the writer's ideas are relevant to the question .There are digressions into mere 'story-telling'. What is needed here is more thought at the planning stage. A more structured plan might focus on the following sections:
1. Love - reality or illusion with reference to the four lovers and Titania/Bottom.
2. The fairies and the importance of dreams/visions/magic in the play.
3. How the mechanicals' play explicitly foregrounds the creating of illusions in dramatic productions.
4. How the language of the play consistently reflects its concern with illusions and realities.