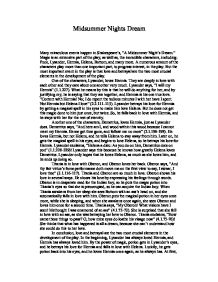 Midsummer Nights Dream Many miraculous events happen in Shakespeare's, "A Midsummer Night's Dream." Magic is an extensive part of the play, as well as, the incredible characters, including: Puck, Lysander, Hermia, Helena, Bottom, and many more. A numerous amount of the characters play more than one important part, to progress interest, in the play. But the most important event in the play is that love and betrayal are the two most crucial elements in the development of the play. One of the characters, Lysander, loves Hermia. They are deeply in love with each other and they care about one another very much. Lysander says, "I will my Hermia" (1.1.227). What he means by this is that he will do anything for her, and by justifying my, he is saying that they are together, and Hermia is his one true love. ...read more.

Lysander says this because he knows how greatly Helena loves Demetrius. Lysander only hopes that he loves Helena, as much as she loves him, and he ends up doing so. Titania is in love with Oberon, and Oberon loves her back. Oberon says, "And thy fair virtue's force performance doth move me on the first view to say, I swear, I love thee" (3.1.116-117). Titania and Oberon are so much in love. Oberon shows his love in several ways. He shows his love by expressing his feelings through words. Oberon is in desperate need for the Indian boy, so he puts the magic potion into Titania's eyes so that she is preoccupied, so he can acquire the Indian boy. When Titania awakens from her sleep she sees Bottom with an a*s's head on, and she automatically falls in love with him. ...read more.

At first, Demetrius has always loved Hermia, but Hermia has and always will be in love with Lysander. To make things right, Demetrius gets potion into his eyes, and when he awakens, he sees Helena. He falls in love with her, and betrays his love to Hermia. It just so happens that Helena is in love with him as well, so he doesn't get the magical potion in his eyes a second time. So far so good, we have two happy couple in love. Moving on to the beautiful Titania. She has always been in love with Oberon. To get the little Indian boy as his servant, he puts the magical potion into her eyes, while she is sleeping. When she awakens she sees an a*s, and she falls in love with him. So she, as well as the other two characters, betrays her one true love. Fortunately, she gets the potion put back into her eyes, and when she awakens once again, she falls back in love with Oberon, as if it were all a dream. ...read more.