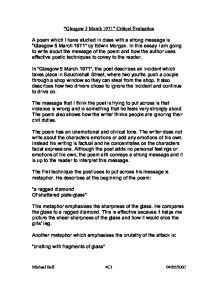 A poem which I have studied in class with a strong message is &quot;Glasgow 5 March 1971&quot; by Edwin Morgan. In this essay I am going to write about the message of the poem and how the author uses

"Glasgow 5 March 1971" Critical Evaluation A poem which I have studied in class with a strong message is "Glasgow 5 March 1971" by Edwin Morgan. In this essay I am going to write about the message of the poem and how the author uses effective poetic techniques to covey to the reader. In "Glasgow 5 March 1971", the poet describes an incident which takes place in Sauchiehall Street, where two youths push a couple through a shop window so they can steal from the shop. It also describes how two drivers chose to ignore the incident and continue to drive on. The message that I think the poet is trying to put across is that violence is wrong and is something that he feels very strongly about. ...read more.

The first technique the poet uses to put across his message is metaphor. He describes at the beginning of the poem: "a ragged diamond Of shattered plate-glass" This metaphor emphasises the sharpness of the glass. He compares the glass to a ragged diamond. This is effective because it helps me picture the sheer sharpness of the glass and how it would slice the girls' leg. Another metaphor which emphasises the brutality of the attack is: "bristling with fragments of glass" In this metaphor the poet is comparing bristles of facial hair to bristles of glass lying on the mans face. It is an effective comparison because it helps me to imagine all the tiny particles of glass. I think the poet wants us to recreate the incident as we read, with as much detail as possible. ...read more.

The poem is full of vivid descriptions of violence, which shock the reader, but the tone used by the poet is matter-of-fact and unemotional: "The two youths who have pushed them Are about to complete the operation" In this quotation we can see the poets' lack of emotion; we can see this from his word choice. The word "operation" emphasises the clinical tone throughout the poem. It also suggests the youths are unemotional as they perform the robbery. I think the absence of emotive language is effective because it lets the reader feel their own emotions instead of the poet writing down his emotions and thoughts. In conclusion I would say the poet successfully uses a variety of techniques to put across to the reader that violence is unnecessary and wrong. This poem made me think about violence and the consequences it can have on innocent people. ?? ?? ?? ?? Michael Bell 4C1 04/05/2007 ...read more.