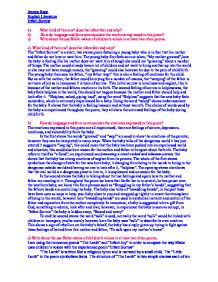 a) What kind of &quot;sorrow&quot; does the infant feel and why?

Jessica r**e English Literature Infant Sorrow a) What kind of "sorrow" does the infant feel and why? b) How do language and form communicate the emotions expressed in this poem? c) Write about the use Blake makes of children's voices in at least two other poems. a) What kind of "sorrow" does the infant feel and why? The "Infant Sorrow" is a short, two stanza poem featuring a young baby who is in fear that his mother and father do not love or want him. The young baby first feels sorrow when, "My mother groaned", here the baby is feeling like his mother does not want him although she could me "groaning" about a number of things. The mother could already have a lot of children and not want to bring another up into the world or she may not have enough money, the "groaning" could also however be due to the pain of child birth. The young baby then sees his father, "my father wept" this is also a feeling of loneliness for the child. But as with the mother, the father could be crying for a number of reasons, the "weeping" of the father is not tears of joy as in innocence it is tears of sorrow. ...read more.

Throughout the poem we know that the fat her is in control, he has power over the new born baby, we know this from phrases such as "Struggling in my father's hands", suggesting that the fathers hands are controlling the baby. The baby also talks of "swaddling bands", in the past these have been seen as ways to keep your baby close to you and wrapped up tightly to create the atmosphere of being in the womb, however here "swaddling bands" are used to symbolise restraint and control of the father and separation from the mother completely. In innocence, a baby is suggested to be a gift from God, something to admire, look after and love, however, in experience the baby is seen as corrupt, in "Infant Sorrow" the baby is hidden away, "Bound and weary" To end the second stanza the word "sulk" is used, normally the word "sulk" would be linked with children or teenagers, youths mainly however here the baby uses "sulk" to describe its own emotion. This shows a sign of rebellion on the baby's behalf, the baby has simply given up trying to fight against these feelings of hatred from this mother and father, "To sulk upon my mother's breast". ...read more.

"The Lamb" is different to "Infant Joy" as the child is playing both parts, the lamb and the child therefore asking and answering its own questions where as in "Infant Joy" there is only one character, the baby, and therefore we only feel its emotions, the mother and father are not involved in the poem. Whereas in "Infant Sorrow" the mother and father play a main part, the baby talks of the upset and moaning of his mother and father shortly and it is born and shows how it is feeling lonely and controlled. Blake here is obviously creating a different child for each poem, and each child obviously has its own voice and opinions. Possibly, the babies in "Infant Joy" and "Infant Sorrow" are the same baby but Blake has given them different situations to live and cope in. Blake uses different language also in each of the poems, in "The Lamb" Blake uses archaic language to symbolise the relationship between the child, God and Jesus, "Dost thou know who made thee," whereas in "Infant Joy" Blake uses innocent, positive words to symbolise that the baby is happy with its birth and excited at the fact that it will soon be named. "Infant Sorrow" is in complete contrast with the two other poems; Blake uses negative, experienced words of corruption and hatred to portray the emotions that the baby is feeling. ...read more.