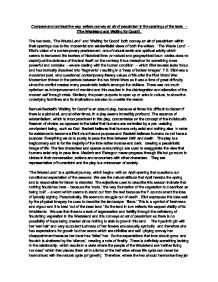 Air of pessimism present in Waiting for Godot and The Wasteland

Compare and contrast the way writers convey an air of pessimism in the openings of the texts - [The Wasteland and Waiting for Godot]. The two texts, 'The Waste Land' and 'Waiting for Godot' both convey an air of pessimism within their openings due to the modernist and existentialist views of both the writers. 'The Waste Land' - Eliot's vision of a contemporary predicament, one of natural erotic and spiritual aridity which seems to transcend the barriers of historical time, or natural and geographical boundaries does no depict just the sickness of the land itself; on the contrary it is a metaphor for something more powerful and complex - we are dealing with the human condition - which Eliot reveals lacks focus and has ironically dissolved into 'fragments' resulting in a 'heap of broken images'. T.S. Eliot was a modernist poet, who questioned contemporary literary values of life after the First World War. Modernism thrived in the periods between the two World Wars as it was a time of great difficulty since the conflict created many pessimistic beliefs amongst the civilians. There was not much optimism as to improvement of mankind and this resulted in the disintegration and alienation of the modern self through crisis. Similarly, the poem purports to open up cracks in culture, to show the underlying fault lines and its implications are also to unsettle the reader. Samuel Beckett's 'Waiting for Godot' is an absurd play, because at times it is difficult to discern if there is a plot at all, and at other times, the play seems incredibly profound. ...read more.

This also explains their confusion and inability to piece information, valuable for their spiritual growth. Stephen Coote highlights that in the wasteland, "Life is death and death is life." This can be seen to be very true, especially in the case of the citizens, as they are not actually living their lives but merely existing on the basic needs necessary for their lives to continue. The people could be described as being soulless which is equivalent to 'death' and therefore living is also seen to be dead. The futility of the lives lead by the citizens, that can be see here, shows the many difficulties people faced after the First World War, claiming that despair was the only honest response to the chaotic universe, admitting defeat and leading bleak lives with a deficiency of love and spirituality. Their pessimistic attitude to the world and to each other is communicated through the ineffectuality of their behaviour. Waiting in 'Waiting for Godot' induces boredom as a theme. Vladimir and Estragon constantly ponder and ask questions, many of which are rhetorical or are left unanswered. Existentialists expressed clearly that human beings can never hope to understand why they are here. The tramps' repetitive inspection of their empty hats perhaps symbolizes mankind's vain search for answers within the spiritual and moral vacuum of a universe. Existentialists further declared that human beings require a rational basis for their lives but are unable to achieve one, and thus human life is a futile passion. ...read more.

They listen, huddled together.) I thought it was ... Godot. ... I could have sworn I heard shouts." Gogo replies more realistically, "Pah! The wind in the reeds." Absurdity in the play is a by-product of their metaphysically bizarre condition. However, the fact that Godot still has not arrived throughout the course of the play, shows the lack of a higher spiritual present to sort out Vladimir's and Estragon's problems. In fact, this increases the pessimism within the play since Gogo and Didi have made no progress throughout the whole play and end at the same place as they started presenting their stagnating positions, which religion or a supreme being does not help to change. In conclusion, the play and the poem both display a bleak view of life and all the characters epitomise all of mankind showing the full range of human emotions. In Godot, the pessimistic view is that they cannot escape waiting for Godot, from each other or from their situation. The optimistic view of the play shows a range of human emotion and the need to share experiences alongside the suffering of finite existence; governed by the past, acting in the present and the uncertainty of the future. On reflection in 'The waste Land', we see that our lives are conditioned by hope and if we yearn to become more spiritual and religious, the negativity of the wasteland portrayed by Eliot's pessimistic tone would soon disappear. The texts, although, express disappointment, disillusionment, and shows desiccated human relationships, also show us some promise of an escape from these things. ...read more.