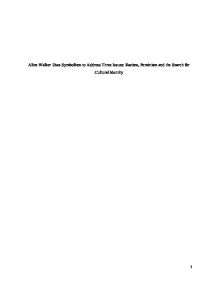 Mama is illiterate, because her school closed when she was in the second grade. The role of black Americans in the late 1920s is best illustrated by Mama's line, "School was closed down. Don't ask me why: in 1927 colored asked fewer questions that they do now..." (Walker, "Everyday Use") When Mama describes the old house, burning down it symbolizes the ending of slavery and the decreed civil rights. The scars that Mamma's daughter Maggie, bear are representative of the pain of the past and difficulty in moving from the role of subservience to equality. Maggie has difficulty looking "you" in the eye just as the American n***o had difficulty moving from the subservient role to peer in dealings with whites. Maggie's head down on the chest at first appears as an as shame for her scars from the house fire, but they come to symbolize a person caught in the old black paradigm, unable to embrace newfound freedoms in society. The fire of slavery has damaged Maggie and she resigns herself to a transitional cultural existence, neither old nor new. Mama represents the ideals of Martin Luther King through her dream of going on the Johnny Carson show to meet Dee. She embraces the idea of this fantasy and takes pleasure in replaying it in her mind. Ultimately, Mamma is thrust back to the reality that it will never happen, just as she seems to resign herself to the fact that King's dreams are not real for her generation but for the next. ...read more.

Dee shows the extreme side of Black Civil rights, "Black Panthers" who reject their American culture, seeking to reinvent a heritage with proud African roots. That fact Dee is rejecting hundreds of years of her heritage, for one that is fabricated is disconcerting to Mama. Dee projects so little insight to her American heritage that when asked what she would do with the family quilts she replies, It is clear from Maggie's statement that her "everyday use" of the quilts would be as a reminder of her Grandma Dee. Dee's primary use for the quilts would be to hang them on the wall as a reminder of her superior social and economic status. (White, David. "'Everyday Use': Defining African-American Heritage.) This parallels her with middle class girlfriend's family portraits hanging on the wall. Dee will only observe her family heritage, but Maggie will ast as a cultural role model every day. Alice Walker is effective in weaving symbolism into much of her writing and "Everyday Use" is no exception. Walker possesses the ability to write on a multifaceted level that is simple but purposeful with profound underlying themes. Her style of writing allows her to convey her messages to her readers, each having the possibility of gaining as much as their intellect and backgrounds will permit. She avoids polarization, but challenges her literary audience with this symbolic writing style. In addressing topics, that she is both knowledgeable and passionate about Alice Walker uses symbolism to address three issues: r****m, Feminism and the Search for Cultural Identity. ...read more.