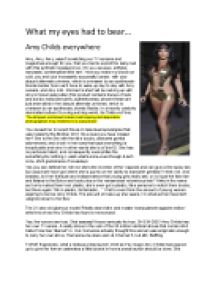 ﻿What my eyes had to bear? Amy Childs everywhere Amy, Amy, Amy; wasn?t bewitching our TV screens and magazines enough for you, that you had to exploit the daily mail with this synthetic massacre too. Oh you vacuous, artificial, narcissist, contemptible little ?tart?. How you make my blood run cold, you and your incessantly successful career, with your absurd alternate universe, which is overseen by an apotheosis- blonde barbie Soon we?ll have to wake up day to day with Amy cereals, and Amy milk. Morrison?s shelf will be racking up with Amy?s homemade butter (this product contains traces of nuts and acrylic nails).Genuinity, authenticness, sincere these are just anomalies in her absurd alternate universe; which is overseen by an apotheosis, blonde Barbie. In a heavily celebrity dominated culture it?s a dog eat dog world, its Childs vs Price. ?The stripped, eroticised, brazen, bed hopping and despicable photographed Amy Childs form is everywhere? You viewed her in recent times on televisual apocalypse that was Celebrity Big Brother 2011.How could you have missed her? She is the one with the fake b***s, diamante genital adornments, and a look in her eyes that says everything is inexplicable and new. ...read more.

The stripped, eroticised, brazen, bed hopping and despicable photographed Amy Childs form is everywhere; in reality shows, on advertising billboards Gosh! I just apprehended as to why the motorways have always been soo frantic. D?ya know what I mean! ?It?s All About Amy?, the horror amongst horrors... A kind of TOWIE-meets-The Next Chapter-meets-Made in Chelsea-meets-Signed-by-Katie-Price. In short, a programme which makes you want to kill people, and then yourself. For alternatively it?s an Amy Child?s world and we have to live in it. This is all basically a popularity contest, with all the barbarism of a high school prom queen election, but none of the day to day perception. Just to get in to the industrial of fame and fortune this is a requirement. Amy must have been conscious of her public image, a chintzy patchwork of overpaid, over competent (at times), over exposed, over easy, just ... over. Not only doing the show was enough, Nooooooo! She?s been following Pricey's Guide to Fame and Fortune also she went on to taking Posh?s route to success by launching her debut clothing collection at Britain?s Next Top Model show and we?re stunned as to why it is that she is deemed deserving of her series/clothing line/free range to compose sentences without the supervision of a responsible adult. ...read more.

However all these carbon copy, assembly line celebrities walk around with reality shows to manipulate people and indoctrinate them as they want us to see the real them. And I give them a standing ovation, not just applaud for diabolical, scheming plans, to con us into thinking they are just like us. But the ?real? them that they want us all to see is imaginary, something they fabricated while working their dead end job like the rest of us. The only thing that separates them from the rest of us is ego, and their artificialness. Where?s all the real women gone, I?d rather watch the Oprah Winfrey show, or Mother Theresa on TV, moralizing us about the poor and poverty than watching a blonde selfish bimbo throwing a tantrum like a Child, or just is stunned by a washing machine going round and round and round. Sure I can go on and on about Amy Childs and why for her, life is child?s play, buts its up to you really, there are women who have achieved success in their field, who have made strides in science and technology, and who have fought to support women across the globe. A spray tan, b**b jobs, vajazzles and a picture in the tabloids, or a Nobel Prize for Physics? I know which I?d rather have my daughters aspire to be. ...read more.