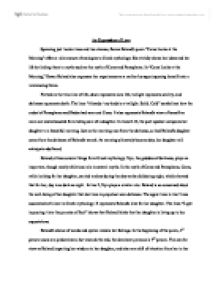 An Expression of Love

An Expression of Love Spanning just twelve lines and two stanzas, Eavan Boland's poem "Ceres Looks at the Morning" offers a rich amount of analogies to Greek mythology. She vividly shows her ideas and her life by linking them to myths such as the myth of Ceres and Persephone. In "Ceres Looks at the Morning," Eavan Boland also expresses her experiences as a mother by superimposing herself onto a reminiscing Ceres. Plotted on the time-line of life, dawn represents new life, twilight represents senility, and darkness represents death. ...read more.

Nyx, the goddess of darkness, plays an important, though mostly oblivious role in several myths. In the myth of Ceres and Persephone, Ceres, while looking for her daughter, carried torches during the day as she did during night, which showed that for her, day is as dark as night. In line 2, Nyx plays a similar role. Boland is so concerned about the well-being of her daughter that she lives in perpetual near-darkness. The apple trees in line 5 was associated with love in Greek mythology. It represents Boland's love for her daughter. ...read more.

The line "I wake slowly" shows that she is living in the moment instead of remembering the past. Boland views herself in the present tense, but refers to her daughter in the past and future tense. This shows that Boland feels that her daughter completes and complements her. "Ceres Looks at the Morning" is a poem filled with unique and fascinating details of Boland's feelings and her life. Not only is the poem a homage to Ceres, but it is also an ode to all mothers. Deep in meaning and symbols, "Ceres Looks at the Morning" is an outstanding poem in the genre of poem about the myth of Ceres and Persephone. ...read more.