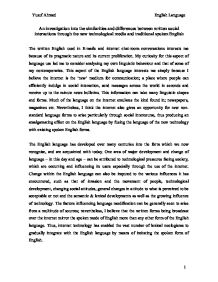 An investigation into the similarities and differences between written social interactions through the new technological media and traditional spoken English The written English used in E-mails and internet chat-room conversations interests me because of its pragmatic nature and its current proliferation. My curiosity for this aspect of language use led me to consider analysing my own linguistic behaviour and that of some of my contemporaries. This aspect of the English language interests me simply because I believe the internet is the 'new' medium for communication; a place where people can efficiently indulge in social interaction, send messages across the world in seconds and receive up to the minute news bulletins. This information can take many linguistic shapes and forms. Much of the language on the internet emulates the kind found in; newspapers, magazines etc. Nevertheless, I think the internet also gives an opportunity for new non-standard language forms to arise particularly through social intercourse, thus producing an amalgamating effect on the English language by fusing the language of the new technology with existing spoken English forms. The English language has developed over many centuries into the form which we now recognise, and are acquainted with today. One area of major development and change of language - in this day and age - can be attributed to technological pressures facing society, which are occurring and influencing its users especially through the use of the internet. Change within the English language can also be imputed to the various influences it has encountered, such as that of invasion and the movement of people, technological development, changing social attitudes, general changes in attitude to what is perceived to be acceptable or not and the semantic & lexical developments as well as the growing influence of technology. The factors influencing language modification can be generally seen to arise from a multitude of sources; nevertheless, I believe that the written forms being broadcast over the internet mirror the spoken mode of English more than any other form of the English language. ...read more.

Rather, the other likely platforms on which such words are expected to be imposed are text-messaging and spoken communication. Another very popular example found not only within the texts that I have analysed, but also in many other contexts is the use of the abbreviation 'u' as opposed to the standard 'you'. The occurrence of this abbreviation has been immense; regardless of class, background or education, numerous people use this as a catalyst when typing or texting within an interactional context. The innovative usage of English is obvious throughout these texts; an important factor contributing to the mimicking of spoken English through the internet is the omission of punctuation. For example, the first interrogative in Text C: 'Hows it going???' is clearly non-standard. The first word lacks the use of an apostrophe and the word 'it' seems to be an incredible generalisation. Furthermore, the eccentric use of three question-marks as opposed to one intensifies the semantic weight of the question, urging the need for a quick answer and connotes the magnitude of the interrogative. Similar rejuvenation of the English language can be seen taking place at the commencement of Text D: 'Ime chillin, how u been???' Once again orthography imitates phonology, where the omission of an apostrophe and the addition of the letter 'e' demonstrate the colloquial voice that Student A has utilised and conveyed in his writing. The elimination of the auxiliary verb 'have' in 'how u been???' represents a departure from standard grammatical forms, conceivably done in order to make typing more efficient, thus resulting in being read as colloquialism. Texts C and D interlink with each other as opposed to Texts A and B which can be read in isolation from the other two texts without much difficulty. For example, if one were to read Text D only without first having read Text C, many of the statements would seem ambiguous: 'yeh i know its been a loooooong time since we linked up and dat.' ...read more.

Text B (internet chat-room conversation) Text C (E-mail) Text D (E-mail) Phatic expressions 4 5 2 2 Deictic expressions 18 16 14 14 Non-fluency features 0 1 0 0 Dialect/non-standard grammar 3 0 3 4 Dialect vocabulary 4 1 3 2 New slang 0 0 0 0 Phonological omission 15 5 7 9 Assimilation 9 2 10 7 Elision 5 4 5 3 As observed from the table above, the examples of implementation of spoken English forms by means of written internet dialogue and monologue are profuse. One can deduce from my results that phatic and deictic expressions have become crucial in opening the doorways for spoken English to enter and fuse with written English. Moreover, the high records of phonological frequency of omission, assimilation and elision show that the main process of fusion also consists of change since these are intrinsically attributed to language change. One may also discern that, the internet chat-room conversations possess the ability to increase the number of utterances mimicked over the e-mail forms. This is due to the fact that, the conversation is a dialogue of continuous speech; hence the participants do not have enough time to think before writing. On the other hand, the e-mail is a monologue, thus there is no time constraint and the participants would not be waiting for a quick response, therefore the process of carefully planning and strategically executing sentences is innate. To conclude, the internet in general has embraced itself with many different modes of the English language. The most dominant of these modes is ostensibly the spoken mode. Areas of spontaneous transmission, in particular chat-rooms (and e-mails), must be accredited with having sheltered the most prolific and significant types of spoken discourse, that have then inevitably been mimicked and changed. This process then produces the spoken discourses, contemporaneous and similar in style to those presented in this research. The linguist is then enthralled with the enthusing task of exhausting all efforts in reaching a conclusion for those conflicts that arise within this area of study. ...read more.