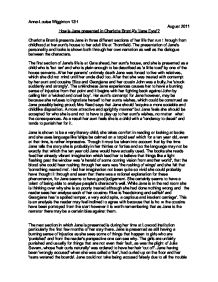 Analyse the presentation of Jane in Bronte's 'Jane Eyre'

Anna-Louise Wigginton 13H August 2011 How is Jane presented in Charlotte Bront�'s 'Jane Eyre'? Charlotte Bront� presents Jane in three different sections of her life that run through from childhood at her aunt's house to her adult life at Thornfield. The presentation of Jane's personality and looks is shown both through her own narration as well as the dialogue between the characters. The first section of Jane's life is at Gateshead, her aunt's house, and she is presented as a child who is 'but ten' and who is plain enough to be described as 'a little toad' by one of the house servants. After her parents' untimely death Jane was forced to live with relatives, which she did not mind until her uncle died too. After that she was treated with contempt by her aunt and cousins Eliza and Georgiana and her cousin John was a bully, he 'struck suddenly and strongly'. The unkindness Jane experiences causes her to have a burning sense of injustice from that point and it begins with her fighting back against John by calling him a 'wicked and cruel boy'. Her aunt's contempt for Jane however, may be because she refuses to ingratiate herself to her aunts wishes, which could be construed as Jane possibly being proud; Mrs Reed says that Jane should 'acquire a more sociable and childlike disposition. ...read more.

Jane could not take being accused falsely due to all the trouble it caused her at her aunt's house and so she keeps grudges against that do wrongly accuse her. Though it may have been seen previously in the section at Gateshead, the reader sees it more clearly during her times at Lowood that Jane could be considered stubborn. There are many times when Helen Burns tries to change Jane's mind about things that have mostly to do with religion. The first time the reader sees this is when Helen tells Jane that 'if all the world hated you' but 'your own conscience approved you' then she would not be 'without friends', but Jane determinedly states 'I know I should think well of myself; but that is not enough: if others don't love me, I would rather die than live'. This also shows a dependant need, in Jane, to be liked by all she meets and a very melodramatic side to her that the reader rarely sees. The last important way the Jane is presented in in this section is as a very bright and hard working girl. On her first day she had 'reached the head of my class' and she tells the reader that she 'toiled hard' and 'in a few weeks I was promoted to a higher class: in less than two months I was allowed to commence French and drawing'. ...read more.

She goes on to tell Rochester in an abstract way that she loves him by saying 'And if God had gifted me with some beauty, and much wealth, I should have made it as hard for you to leave me, as it is now for me to leave you'. Her passionate nature, most likely, came from her want to be treated as an equal, and though she is no social equal to Mr Rochester she feel that she is his equal in intellect and feels down trodden when she is not treated as such. In the same passionate outburst as shown above she also exclaims 'it is my spirit that addresses your spirit; just as if both had passed through the grave, and we stood at God's feet, equal - as we are!' This shows her need to be treated as an equal by the one she loves. Jane is presented as a girl who grows up being passionate about being treated equally and having a burning sense of injustice when people are wrongly accused or punished without cause. She is described as being a plain girl her whole life who is very smart, literary, hard working and imaginative. This is shown through the narration as well as through the dialogue between character. ...read more.