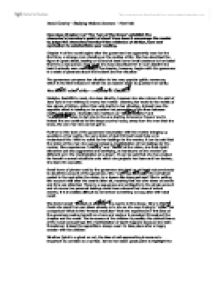 Analysis of chapter 4 of Turn of the Screw

How does Chapter 4 of 'The Turn of the Screw' establish the character's/narrator's point of view? How does it encourage the reader to judge the character/narrator? Use evidence of diction, tone and symbolism to substantiate your reading. Chapter 4 of the novel begins after the governess has apparently seen for the first time, a strange man standing on the rooftop of Bly. She has described the figure in great detail, leading us to lend at least some small credence to her belief that it is a real person; how could she have described him in such detail if she hadn't actually seen something? The chapter, however, begins with the governess in a state of paranoia about the incident and her situation. The governess compares her situation to two very popular gothic romances, which is the first instance in which we as readers begin to question her sanity. Was there a 'secret' at Bly - a mystery of Udolpho...? Udolpho, Radcliffe's novel, she does directly, however she also mirrors the plot of Jane Eyre in her wishing to marry her master. Likening her world to the worlds of two pieces of fiction, rather than add clarity to her situation, instead have the opposite effect in leading us to question her perception of the lines between reality and fantasy. ...read more.

She becomes incredibly critical of the headmaster and school, "little horrid unclean school-world" and "stupid sordid headmasters" show us that she is becoming very defensive, almost irrationally so, of this one thing - the children - that is almost keeping her going. There is an altogether unwholesome purity to Miles and Flora, as if they are 'too' innocent and it creates ideas in our own heads about how they could be playing with the governess. Could Quint be the manifestation of a sense of her feeling that this happiness with the children is threatened? The governess' own ideas about Quint also lead us to question her because they are entirely subjective views and they get more and more subjective throughout the novel. Originally there was some credibility to her account as she described the physical aspects of the 'ghost'. We don't know that it's Quint, just a man, and this makes her account seem more trustworthy. On the second occasion she gives her thoughts and the account begins to unravel a little. How can she possibly know that he was looking for the children? She can not possibly. She makes claims that can't be proven such as the "monstrous liberty" that this 'traveller' has taken by coming into the grounds and taking a look form the tower. ...read more.

She even loses all sense of "duration" again. She speaks of losing him and outside being "empty with a great emptiness", sounding almost disappointed at not finding the man, or manifestation of the master. She has feelings for her absent master, similar in appearance to this vision, s****l desires, and this on top of the bad news that she has been receiving from home and the paranoia she has been experiencing builds up and up until it manifests itself on a dark night/grey day and she thinks that she sees something. On both occasions she has even been the instigator of her placement; she decides to go for a walk and she was the one who left the gloves where she had on the second occasion. Was it mere coincidence that the apparitions happened on both of these occasions? We are left, as usual in the novel, unsure by the ambiguity and to decide for ourselves. Ironically at the end of the chapter, the governess is juxtaposed with the position of the stranger, and she becomes the source of terror for everybody else rather than the heroine as she presses herself against the window and Mrs Grose enters the room. ?? ?? ?? ?? Daniel Gourlay - Studying Modern Literature - First Task ...read more.