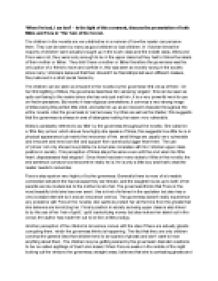 When Im bad, I am bad In the light of this comment, discuss the presentation of both Miles and Flora in The Turn of the Screw.

﻿?When I?m bad, I am bad? ? In the light of this comment, discuss the presentation of both Miles and Flora in ?The Turn of the Screw?. The children in the novella are very distinctive in a manner of how the reader can perceive them. They can be seen by many as good children or bad children. In Victorian times the majority of children were actually brought up in the lower class and the middle class, Miles and Flora were not, they were lucky enough to be in the upper class but they had to follow the ideals of their mother or father. They didn?t have a mother or father therefore the governess was the only option of a friend to have and confide in, this was seen as morally wrong in the society since many Victorians believed that their shouldn?t be friendships between different classes, they believed in a strict social hierarchy. The children can be seen as innocent in the novella by the governess? first views of them. On her first sighting of Miles, the governess describes him as being ?angelic?, this can be seen as quite confusing to the reader since she has only just met him, it is a very powerful word to use on first impressions. ...read more.

Another perception of the children?s innocence comes with the idea if there are actually ghosts corrupting them, which the governess thinks is happening. The fact that they are only children conveys the general idea that children tend to be scared of ghosts and don?t want to hear anything about them. The children may be getting scared by the governess? dramatic reactions to her so called sightings of Quint and Jessel. When Flora is awake in the middle of the night looking out the window, the governess, straight away, believes that she is contacting ghosts and so her suspicions about ghosts are increased but they are only children and it turns out they were only having a joke. Children can still have fun even though they are of noble birth but the governess doesn?t seem to realize this. Maria Edgeworth commented on the grave dangers of leaving young children in the supervision of servants, in this case the governess is actually a servant in social hierarchy terms but the master in terms of profession terms. The children however can be seen as being ?bad?. The quote in the title itself tells how Miles could be being sinister. When the governess wakes up to see why Flora is standing up at the window, she immediately believes that she is contacting either Quint or Jessel because she is extremely paranoid. ...read more.

The descriptions of the children actually change as the reader progresses through the novella. On first impressions the children are compared to being like angels and royalty which is all well and good but she has yet to meet their true personalities. She describes Flora as an ?old, old woman? which is honestly the most ridiculous thing that a child can be called. This obviously cannot be a description of her physical appearance since she is only 8 years old but possibly how the governess believes that she is corrupted by Miss Jessel. Perhaps every time Jessel is around, Flora?s soul seems to be aging or it could actually be that she is becoming smarter with every appearance of Jessel so she is scheming more. This could suggest a loss of innocence in Flora, she used to be ?the most beautiful child? and now she is an ?old, old woman?. To conclude I believe that the children are actually innocent. They are only children so how in any way can they actually be sinister and possibly evil? Yes there is strong evidence that the children could be being bad and corrupting the governess but being evil is too much of an extent. Therefore I believe in the innocence of the children. ...read more.