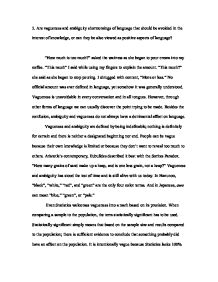 Are vagueness and ambiguity shortcomings of language that should be avoided in the interest of knowledge, or can they be also viewed as positive aspects of language?

2. Are vagueness and ambiguity shortcomings of language that should be avoided in the interest of knowledge, or can they be also viewed as positive aspects of language? "How much is too much?" asked the waitress as she began to pour cream into my coffee. "This much" I said while using my fingers to explain the amount. "This much?" she said as she began to stop pouring. I shrugged with content, "More or less." No official amount was ever defined in language, yet somehow it was generally understood. Vagueness is unavoidable in every conversation and in all tongues. However, through other forms of language we can usually discover the point trying to be made. ...read more.

In Hanunoo, "black", "white," "red", and "green" are the only four color terms. And in Japanese, awo can mean "blue," "green", or "pale." Even Statistics welcomes vagueness into a math based on its precision. When comparing a sample to the population, the term statistically significant has to be used. Statistically significant simply means that based on the sample size and results compared to the population; there is sufficient evidence to conclude that something probably did have an affect on the population. It is intentionally vague because Statistics lacks 100% confidence in everything. Besides in Statistics, vagueness has a home in Literature class. Shakespeare constantly toyed with two characters carrying on a conversation, just vague enough, that both characters are talking about a different topic. ...read more.

It contains too many "what ifs" to ever be restricted by a simple truth table. Sometimes ambiguous statements can be beneficial. Vague statements that appear to have important content often make the speaker seem wise. In fact, all politicians rely on these ambiguous statements in order to make themselves appear good, while not really providing any real specifics for their opponents to argue with. This way, politicians are not lying (the one and only way). Vagueness spurs a conversation of clarification. In which case, the point will definitely be put across. Vagueness and ambiguity need to be avoided whenever something specific is in need. In all other cases, ambiguous statements are welcomed and often encouraged. These statements often keep a conversation alive. I just wish I would have specified with the waitress, she ended up giving me too much cream. ...read more.