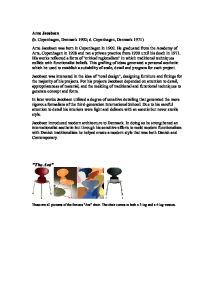 Arne Jacobsen (b. Copenhagen, Denmark 1902; d. Copenhagen, Denmark 1971) Arne Jacobsen was born in Copenhagen in 1902. He graduated from the Academy of Arts, Copenhagen in 1928 and ran a private practice from 1930 until his death in 1971. His works reflected a form of "critical regionalism" in which traditional techniques collide with functionalist beliefs. This grafting of ideas generated a personal aesthetic which he used to establish a suitability of scale, detail and program for each project. ...read more.

Due to his careful attention to detail his interiors were light and delicate with an ascetic but never sterile style. Jacobsen introduced modern architecture to Denmark. In doing so he strengthened an internationalist aesthetic but through his sensitive efforts to meld modern functionalism with Danish traditionalism he helped create a modern style that was both Danish and Contemporary. "The Ant" These are all pictures of the famous "Ant" chair. The chair comes in both a 3-leg and a 4-leg version. ...read more.

"AJ Silverware" The AJ Silverware series was designed in the 60's and was actually used in Stanley Cubrik's 2001 "A Space odessy" "Cylinda tableware" The "Cylinda" tableware series is a series very often copied. Almost every Danish household have at some point had either an original or a copy of this series. "St. Catherine's College, Oxford, Great Britain" St. Catherine's College in Oxford, Great Britain is a very good example of Arne Jacobsen functionalistic architecture. "SAS Royal Hotel, Copenhagen, Denmark" The very magnificent hotel is the 20-floor high-rise in the back of the picture. ...read more.