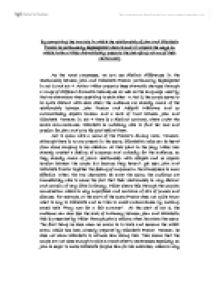 By comparing the two acts in which the relationship of John and Elizabeth Proctor is particularly highlighted (Acts 2 and 4); explore the ways in which Arthur Miller dramatically presents the changing nature of their relationship.

By comparing the two acts in which the relationship of John and Elizabeth Proctor is particularly highlighted (Acts 2 and 4); explore the ways in which Arthur Miller dramatically presents the changing nature of their relationship As the novel progresses, we can see distinct differences in the relationship between John and Elizabeth Proctor, particularly highlighted in act 2 and act 4. Arthur Miller presents these dramatic changes through a range of different dramatic techniques as well as the language used by the two characters when speaking to each other. In Act 2, the couple seems to be quite distant with each other; the audience are already aware of the relationship between John Proctor and Abigail Williams and so automatically expects tension and a lack of trust between John and Elizabeth. However, in act 4 there is a distinct contrast, where under the severe circumstances, Elizabeth is suddenly able to find her love and passion for John and puts his past behind them. Act 2 opens with a scene of the Proctor's dining room. However, although there is no one present in the scene, Elizabeth's voice can be heard from above singing to her children. At this point in the play, Miller has already created a feeling of suspense and curiosity for the audience, as they already aware of John's relationship with Abigail and so expects tension between the couple but because they haven't yet seen John and Elizabeth Proctor together the feeling of suspense in the atmosphere is more effective. When the two characters do enter the scene, the audience are immediately able to sense the fact that their relationship is very distant and contain of very little intimacy. ...read more.

However, as a result of trying to be together with their problems bubbling under the surface makes their enthusiasm seem too much to be real and makes the relationship seem fake. For example, when Elizabeth watches John eat his supper, instead of creating an atmosphere where a loving wife enjoys her husband enthusiastically eating her dinner, a feeling of discomfort and awkwardness is created. It's as if, neither John nor Elizabeth knows what to say to each other and so the feeling of enjoyment between a loving couple turns to wariness and uncertainty. This is backed up by John's abrupt statement in attempt to break the awkward silence "I think we'll see green fields soon". But despite the couple's attempt to keep their problems under control, John is frustrated with the lack of trust from Elizabeth, which seems to reflect the main problem existing in Salem as no one can trust someone else enough to know that they won't cry their friend's name for witch when pressurised to, and as their argument climaxes, John tells Elizabeth with a "solemn warning" that "you will not judge me more". This suggests that John still has authority over Elizabeth and is desperate for her to trust him again. His warning is more like an order as apposed to a statement in attempt to make Elizabeth forgive him. But it seems apparent from Elizabeth's language that she has "lost all faith in him" as she turns away from John and replies "do as you wish". This implies that Elizabeth does not care what John does, because she believes that John has forgotten her as well as Abigail. ...read more.

In act 4, John's language is greatly used to show his emotions. He starts of with short, sharp and to the point phrases. For example, "The child?" his short question shows his desperation to try and cut out the realisation of their situation. It also shows the audience that their relationship has developed into one in which they can have a conversation which highlights their similarities as well as strengths, unlike in most of act 2, which as a result this drove them further apart from each other as neither one of them is willing to admit to the other. This can be seen in the next two quotes from act 2, (Elizabeth) "Do as you wish, then", (John) "I'll not have your suspicion any more". And so through a short question, Miller is able to show the audience that John and Elizabeth are brought together by simply discussing a topic which connects them both together. Throughout the novel, we can see that John and Elizabeth Proctor's relationship developed immensely from act 2, where both the couple are trying desperately to please the other resulting in a superficial relationship to act 4, where the recognition of their situation prompts the couple to release their true emotion towards each other and forget about the suspicion, lack of trust, and intimacy that continuously rose in their relationship in act 2. However, it is ironic that the cause for them to connect with each other is also the cause that will prevent them to put their affection and love into further practice. Arthur Miller has presented to his audience the dramatic change in the Proctor's relationship through the way he illustrate the language used by the characters as well as through a number of different dramatic techniques. ...read more.