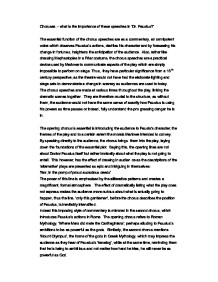 Choruses - what is the importance of these speeches in 'Dr. Faustus?

Choruses - what is the importance of these speeches in 'Dr. Faustus?' The essential function of the chorus speeches are as a commentary, an omnipotent voice which observes Faustus's actions, clarifies his character and by foreseeing his change in fortunes, heightens the anticipation of the audience. Also, rather like dressing Mephastoples in a Friar costume, the chorus speeches are a practical device used by Marlowe to communicate aspects of the play which are simply impossible to perform on stage. Thus, they have particular significance from a 16th century perspective, as the theatre would not have had the elaborate lighting and stage sets to demonstrate a change in scenery as audiences are used to today. The chorus speeches are made at various times throughout the play, linking the dramatic scenes together. They are therefore crucial to the structure, as without them, the audience would not have the same sense of exactly how Faustus is using his powers as time passes or indeed, fully understand the progressing danger he is in. The opening chorus is essential is introducing the audience to Fausts's character, the themes of the play and to a certain extent the morals Marlowe intended to convey. By speaking directly to the audience, the chorus brings them into the play, laying down the foundations of the essential plot. ...read more.

Although it is clear that Faustus desires to study necromancy, it is, however, uncertain exactly why he turns to it. The allusions to greed suggest that Faustus had learned too much and therefore has become absorbed in his own power and knowledge, leading to believe that necromancy is not as dangerous as it seems. On the other hand, eating is a necessity so it is almost as if it is essential for Faustus to learn as it is all he can do and he therefore has to learn something he has never studied before. Either way, it is obvious that his ambition is a dangerous thing, symbolised by the allusion to Icarus, thus the play as a whole may be seen as a more detailed extension of the consequences of ''over-reaching'' which the audience is introduced to in the opening lines of the play. These allusions to appetite are mirrored in the forth chorus, when Faustus's death is nigh: he 'would not banquet', with 'belly cheer' as 'the feast has ended,'' further emphasising that is not Faustus's ability that les to his downfall but his greed to be what he was not supposed to be. It must be remembered that the power of this language would have a much greater influence on a 16th Century audience than it would do today. ...read more.

For example, 'Chorus four' tells the audience that Faustus is going to 'die shortly', anticipating a dramatic death as well as concluding that the twenty-four years are almost over. Furthermore, Chorus two tells us that 'he now is gone to prove cosmography', showing us what seemingly magnificent things Fasutus is currently experiencing without having to actually perform them on stage. Certainly, the powerful metaphors used suggest a serious tone to illustrate the fact that our actions have consequences. This is particularly true of the final, emphatic chorus, which in a way shows us that Faustus wasted his talents: ''Cut is the branch that might have grown full straight.'' gives the impression that despite his ambitions, Faustus had unfulfilled his potential and could have used his skills to help others instead of for selfish reasons. Although for it's time the essential themes of the play seem quite forward thinking yet chourus speeches were not an unheard of feature in 16th century England. They had been preciously used in Morality Plays so Marloew was arguably using a structure that had proved to be a success. However, by having a chorus directly speaking to the audience there is increased communication between the audience and the actors on stage and is simply a simple yet effective way to connect the scenes together and eliminate any confusion the audience may have. ...read more.