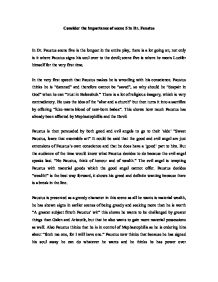 Consider the importance of scene 5 in Dr. Faustus

Consider the importance of scene 5 in Dr. Faustus In Dr. Faustus scene five is the longest in the entire play, there is a lot going on, not only is it where Faustus signs his soul over to the devil; scene five is where he meets Lucifer himself for the very first time. In the very first speech that Faustus makes he is wrestling with his conscience. Faustus thinks he is "damned" and therefore cannot be "saved", so why should he "despair in God" when he can "trust in Belezebub." There is a lot of religious imagery, which is very contradictory. He uses the idea of the "altar and a church" but then turns it into a sacrifice by offering "luke-warm blood of new-born babes". This shows how much Faustus has already been affected by Mephastophillis and the Devil. ...read more.

Also Faustus thinks that he is in control of Mephastophilis as he is ordering him about "fetch me one, for I will have one." Faustus now thinks that because he has signed his soul away he can do whatever he wants and he thinks he has power over Mephastophilis, but the truth is he does not, he was given that power by Lucifer and is now a servant of him, he is not "as great as Lucifer" like he thinks. The signing of the deed is really foreboding of Faustus's downfall because his "blood congeals and I can write no more" This could be interpreted as a sign from god telling Faustus not to sign the contract. Mephastophilis however is quick to get some fire in order for Faustus to sign the contract, this could be imagery of the fires of h**l, and the pain that Faustus would feel from firstly cutting himself and ...read more.

knew, this shows already that his 'power' is not all the great already as he is being told information that he already knows. The vague description is also foreboding because Faustus has already signed his soul over to the Devil and therefore that is where he will remain for the rest of eternity after his twenty-four years are up However it could be interpreted that Mephastophilis's lack of description could be out of fear of the place, that it is too horrible to describe any further than vague details. Personally I think that scene five of Dr. Faustus is very important because this is where Faustus' fatal flaw of greed is really shown. Not only that, but he thinks that "god loves thee not" this shows that he is willing to go to the devil in order to gain material power that he has never gained in his live of being a 'godly' person. ...read more.