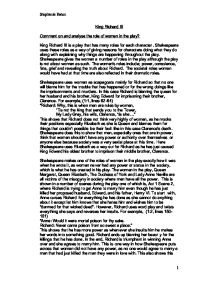 Comment on and analyse the role of women in the King Richard 3rd?

King Richard III Comment on and analyse the role of women in the play? King Richard III is a play that has many roles for each character. Shakespeare uses these roles as a way of giving reasons for characters doing what they do along with explaining why things are happening throughout the play. Shakespeare gives the women a number of roles in the play although the play is not about women as such. The women's roles include; power, conscience, fate, grief and revealing the truth about Richard. The societal roles women would have had at that time are also reflected in their dramatic roles. Shakespeare uses women as scapegoats mainly for Richard so that no one will blame him for the trouble that has happened or for the wrong doings like the imprisonments and murders. In this case Richard is blaming the queen for her husband and his brother, King Edward for imprisoning their brother, Clarence. For example, (1:1, lines 62-64) "Richard: Why, this is when men are rules by women, 'Tis not the king that sends you to the Tower, My Lady Grey, his wife, Clarence, 'tis she..." This shows that Richard does not think very highly of women, as he mocks their positions especially Elizabeth as she is Queen and blames them for things that couldn't possible be their fault like in this case Clarence's death. Shakespeare does this to show that men, especially ones that are in power, think that women shouldn't have any power or authority over themselves or anyone else because society was a very sexist place at this time. Here Shakespeare uses Elizabeth as a way out for Richard as he has just caused King Edward his oldest brother to imprison their middle brother, Clarence. Shakespeare makes one of the roles of women in the play exactly how it was when he wrote it, as women never had any power or status in the society, which is what he has created in his play. ...read more.

"Duchess: But now two mirrors of his princely semblance Are cracked in pieces by malignant death, And I for comfort have but one false glass, That grieves me when I see my shame in him." This can show that women have no power without men even if it is their sons but more than that is the fact that they see themselves as victims. This also brings across the role of mourning as not only is she a widower but has now lost her two sons that she loved dearly and the only way she can get around this is to mourn their deaths and to grieve as there is nothing that can be done about what has happened. However, with what the Duchess says there is a message about Richard included. This is because throughout the play Shakespeare has made references to shadows, windows and glasses and now he is comparing them to people in the play. The "two mirrors" are Duchess sons, Edward and Clarence, who were always lovely and kind to others and the way he uses the word "cracked" can represent Richard as he is then referred to as a "false glass" which basically means that she has to perfect sons and then an evil one who has broken his mirror of being perfect. Also "comfort" and "grief" are complete opposites and the fact that now the Duchess has her evil son left to help her makes her feel really down. The way Shakespeare puts this across is by saying "grief" as he is saying that she cannot bear to look at him for the simple reason of he makes her feel shameful and she can see that in her own son. The words that are used make Duchess seem weaker than ever as she says herself that she needs support and help of her sons, but now she is going to get none due to her last and only son left being a vicious person that she cannot stand the sight of. ...read more.

The women also let the audience know the real meaning of things that have happened and the true affects that they have, especially the emotional side which is what the women carry. In a way women are like that even in these days, not so much with the power but with emotions as they are more likely to cry and grieve more openly as men often see it as being too vulnerable. Shakespeare does take this to the next level in the play though, as not only does he make the character of Richard show no remorse but also he still blames the women in his life for the things that he does and also for the things that happen to him. Shakespeare created the role of blaming women because Richard could not seem as bad as he really was in the play to the other characters, as he would never have become King if they did. Shakespeare lets women be the target of blame as they are the weaker ones to Richard in the play, however to most of the women in the play, Richard was the weaker one due to his deformity which in the beginning was the reason why he was doing all these ghastly things. This was due to the fact that Richard said as he could not "prove a lover" so he was "determined to prove a villain". Shakespeare made the women in the above ways but they can also be seen as the conscience of Richard and all his bad doing, along with carrying messages to the audience about what has happened and who has done what. If the women did not have this role then half of the story and truth about Richard would not been seen or heard as they are everything that Richard isn't. The women in the play also show us that as much as we like to think we are in control, unfortunately none of us really are. Word Count - 3,526 ?? ?? ?? ?? Stephanie Eaton 1 ...read more.