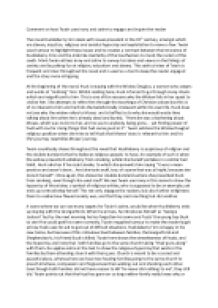 Comment on how Twain uses irony and satire to engage and inspire the reader in &quot;Huckleberry Finn&quot;

Ã¯Â»Â¿Comment on how Twain uses irony and satire to engage and inspire the reader The novel Huckleberry Finn deals with issues prevalent in the 19th century, amongst which are slavery, injustice, religious and societal hypocrisy and exploitation to name a few. Twain uses humour to highlight these issues and he creates a contrast between the innocence of Huckleberry Finn and the mob like mentality of the Southerners to mock the racism of the south. Mark Twain utilises irony and satire to convey his ideas and views on the failings of society and by poking fun at religion, education and slavery. This satirical view of Twain is frequent and clear throughout the novel and is used as a tool to keep the reader engaged and the story more intriguing. At the beginning of the novel, Huck is staying with the Widow Douglas, a woman who adopts and works at â€œcivilizingâ€ him. ...read more.

An example of such is when the widow prevents Huckleberry from smoking, whilst she herself partakes in a similar bad habit. Huck asks her if he could smoke, to which she prevents him saying â€œit was a mean practice and wasnâ€™t cleanâ€¦And she took snuff, too; of course that was all right, because she done it herselfâ€. Once again, this shows her double standards where she prevented Huck from smoking, even though she used snuff. We see Twain use irony in this scene to show the hypocrisy of the widow, a symbol of religious whites, who is supposed to be an example, yet ends up contradicting herself. This not only engages the readers, but also further enlightens them to realise how flawed society was, and that they said one thing but did another. A scene where we can see many targets for Twainâ€™s satire, would be when Huckleberry ends up staying with the Grangerfords. ...read more.

Even though both families did not have reason to kill â€œhe never did nothing to meâ€, they still did. Twain points out that the feud has gone on so long neither family really know why or how it started and they still fought which led to the tragic death of Buck. He satirizes the role of religion. Though they visit church to pray, when theyâ€™re finished, they start to kill each other. This scene allows the readers to get another sense into the flaws of society, religion and how rules are broken and bent to fit around what they want and how it suits them. Twain expertly uses irony and satire in his novel to entertain the readers and to lighten the dark and tragic events which are described to us. He uses irony to criticize enslavement and religious hypocrisy that was prevalent at the time and this is clearly demonstrated through the Gangerford and Shepherdsonâ€™s family feud and their hypocritical church attendance and so called â€˜religiousâ€™ beliefs. ...read more.