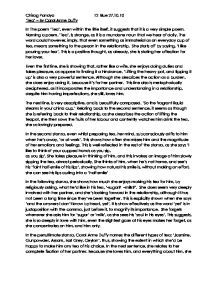 'Tea' - By Carol Anne Duffy In The poem 'Tea', even within the title itself, it suggests that it is a very simple poem. Naming a poem, 'Tea', is strange, as it is a mundane noun that we hear of daily. The word could however, imply, that even something as immaterial as an everyday cup of tea, means something to the person in the relationship. She starts off by saying, 'I like pouring your tea'. This is a positive thought, as already, she is stating her affection for her lover. Even the first line, she is showing that, rather like a wife, she enjoys doing duties and takes pleasure, as oppose to finding it a hindrance. 'Lifting the heavy pot, and tipping it up' is also a very powerful sentence. Although she describes the action as a burden, she does enjoy doing it, because it's for her partner. ...read more.

She thinks of him, when he's not home, and see's his 'faint half-smile of his lips', showing how natural his smile is, without making an effort, she can see his lips curling into a 'half-smile' In the following stanza, she shows how much she enjoys making his tea for him, by religiously asking, what he'd like in his tea, '-sugar? -milk?'. She does seem very deeply involved with her partner, and she's looking forward in the relationship, although it has not been a long time since they've been together. This is explicitly shown when she says 'and the answers I don't know by heart, yet'. It is show effectively as the word 'yet' is in juxtaposition with the comma, just before it, to magnify its importance. She forgets whenever she asks him for 'sugar' or 'milk', as she sees his 'soul in his eyes'. ...read more.

Even in the last stanza, she expresses her affection for him, and compares it to the 'women who harvest the slopes, for the sweetest leaves on Mount Wu-Yi'. In this stanza, Carol Anne Duffy illustrates a mental image of the tropics of China, where numerous teas are harvested from the ground. The word 'harvest' hints a laborious activity, similar to the effort she's demonstrating in her immaterial aspect of making tea. As the women plough for the best leaves, she, strains his tea, so smitten, that she'd want to make every effort in order to give him to best tea. Invoking Mount Wu-Yi transports our minds to Eastern Asia, which is a powerful literary effect. She has fallen so deeply in love with him, even his tea, she is completely besotted about. In the final line, she openly says; 'I am your lover, smitten, straining your tea.' This shows her realism and her sincerity, that she can admit, she is 'smitten'. ?? ?? ?? ?? Chirag Pandya 12 Blue 27.10.10 ...read more.