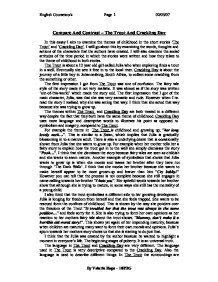 Compare And Contrast &amp;#150; The Trout And Crackling Day

Compare And Contrast - The Trout And Crackling Day In this essay I aim to examine the themes of childhood in the short stories 'The Trout' and 'Crackling Day'. I will go about this by examining the words, thoughts and actions of the characters that the authors have created. I will also examine the social attitudes of the time period in which the stories were written and how they relate to the theme of childhood in both stories. The Trout is about a 12 year old girl called Julia who when exploring finds a trout in a well. Eventually she sets it free in to the local river. Crackling Day is about the journey of a little boy in Johannesburg, South Africa, to collect some crackling from the something or other. The first impression I got from The Trout was one of confusion. The fairy tale style of the story made it not very realistic. It was almost as if the story was written 'out-of-this-world' which made the story odd. The first impression that I got of the main character, Julia, was that she was very sarcastic and rude. However when I re-read the story I realised why she was acting that way. I think that she acted that way because she was trying to grow up. The themes within The Trout and Crackling Day are both treated in a different way despite the fact that they both have the same theme of childhood. ...read more.

The irrelevancy of the setting in The Trout adds to the mystery "...they arrived in G..." I think that the mysterious nature of the story could be symbolic. It was set in the countryside because it enabled him to take the story to an idyllic place. However although the location of Crackling Day is not specifically said, the writer leaves clues in the text which is very specific to the region "d**n Boer dog" and "Yes, baas". This shows us that the Crackling Day is set in South Africa during the time of apartheid. The characters in The Trout and Crackling Day both show courage within their daily lives but it is shown on two different levels. In The Trout Julia shows courage on a more Human level, she faces up to a universal truth (when she complete her rescue of the trout). However in Crackling Day the narrator shows specific courage in a specific situation (when he is receiving lashes from his Uncle). He also shows the human capacity to deal with r****m, hardship, fear, brutality, inequality and the reality of life. Although one form of courage may seem 'better' than the other, they are both equal in their own way. In conclusion I think that the theme of childhood in both stories is treated in the same way, but the result is the same. Both of the authors demonstrate that even It is about a bid for freedom. ?? ?? ?? ?? English Coursework Page 1 02/05/07 By Valerie Hope - 10PDG ...read more.