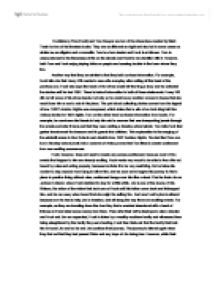 Huckleberry Finn (Huck) and Tom Sawyer are two of the characters created by Mark Twain for two of his timeless books. They are as different as night and day but in some cases as similar as an alligator and a crocodile. Tom is a born leader and Huck is a follower. Tom is unaccustomed to the fierceness of life on the streets and Huck is very familiar with it. However, both Tom and Huck enjoy playing tricks on people and causing trouble in the town where they live. Another way that they are similar is that they both confuse information. For example, Huck tells Jim that Henry VIII married a new wife everyday after cutting off the head of the previous one. Huck also says that each of the wives would tell the king a story and he collected the stories until he had 1001. There is factual information in both of those statements. ...read more.

Huck wants very much to be able to live a life not bound by rules and acting properly, because he finds it to be very restricting. So he fakes his murder to stop anyone from trying to follow him; and as soon as he begins his journey to find a place to practice living without rules, excitement hangs over him like a cloud. First he finds Jim on Jackson's Island, where Huck decided to stay for a little while. Jim is one of the slaves of Ms. Watson, the sister of the widow that took care of Huck until his father came back and kidnapped him, and he ran away when heard that she might be selling him. And now Huck's plan is altered because now he has to help Jim to freedom, and all along the way there are exciting events. For example, as they are traveling down the river they find a wrecked steamboat with a band of thieves on it and steal some money from them. ...read more.

The fact that he actually stops to evaluate what people tell him shows that he is a real intellectual. This causes him to be dissimilar from Tom, because Tom shows little signs being able to make up his own mind about things. That being evident from his blending of the reality he reads about in books and the real world. Huck furthers his inclination to determine whether or not he believes someone by spotting almost instantly that the two men he and Jim pick up are not even remotely related to any form of royalty as they claim to be. Huck ability to reason seems almost ingrained in him. It appears that way because he has had very little schooling and it is doubtful that the schooling he has had covers practicality. That is most likely why Huck is found to be a very complex character, where as Tom is almost transparent. Both are magnificent creations of Mark Twain's imagination. Their friendship just goes to prove that opposites do attract one another. And their adventures are what cause them to be read about to this day. ...read more.