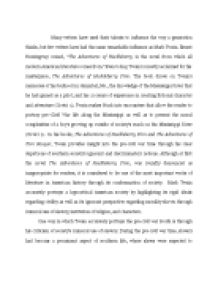 ﻿Many writers have used their talents to influence the way a generation thinks, but few writers have had the same remarkable influence as Mark Twain. Ernest Hemingway coined, ?The Adventures of Huckleberry is the novel from which all modern American literature comes from.? Even today, Twain Is mostly acclaimed for his masterpiece, The Adventures of Huckleberry Finn. The book draws on Twain's memories of his boyhood in Hannibal, Mo., the knowledge of the Mississippi River that he had gained as a pilot, and his 20 years of experience in creating fictional character and adventure (Covici 1). Twain rushes Huck into encounters that allow the reader to portray pre?Civil War life along the Mississippi as well as to present the moral complexities of a boy's growing up outside of society?s reach on the Mississippi River (Covici 1). In his books, The Adventures of Huckleberry Finn and The Adventures of Tom Sawyer, Twain provides insight into the pre-civil war time through his clear depictions of southern society?s ignorant and discriminatory notions. Although at first the novel The Adventures of Huckleberry Finn, was roundly denounced as inappropriate for readers, it is considered to be one of the most important works of literature in American history through its condemnation of society. Mark Twain accurately portrays a hypocritical American society by highlighting its rigid ideals regarding civility as well as its ignorant perspective regarding morality shown through immoral use of slavery, institution of religion, and characters. One way in which Twain accurately portrays the pre-civil war South is through his criticism of society?s immoral use of slavery. ...read more.

Twain once again criticizes the fact that that praying isn?t going to help you get something, because society during the pre-civil war time strongly believed in religion initiating society to be more spiritual rather than practical. Mark Twain creates characters like Miss Watson and Widow Douglas who, although are morally correct and religious, believe that slavery is necessary for life. Miss Watson, who helps raise Huck in the beginning of the novel, is someone who isn?t bothered the least of keeping slaves. While growing up with the slave trade, she became accustomed to the use of slavery; finding nothing immorally wrong with it. However the fact that she cannot perceive right from wrong, such as keeping and selling slaves, contributes to her uncivilized behavior like many other characters, thus representing an entire society. An example is after Jim escapes from Miss Watson?s home, as he overhears her planning to sell him for eight hundred dollars, thus he sets out on his journey to freedom with Huck he states, ?pecks on me all de time, en treats me pooty rough? (Twain 38). This displays how though Miss Watson is always trying to civilize Huck and set him on the right path to a religious civilized lifestyle, yet treats Jim very poorly. In essence, Miss Watson demonstrates society?s hypocrisy regarding morality once again, as she treats one human being, (Huck), with care and other human being (Jim) with little to no regard as if property. Not to mention In the Adventures of Tom Sawyer, Twain uses humor to denounce Sunday school, an institution of religion, for making children memorize Bible verses for a measly Bible as a reward. ...read more.

In essence, sherburn?s speech condemns society of its hypocrisy of being something it?s not, not to mention also portraying a society following rigid ideals, such as societal conformity and bondage that keeps them from moving forward. Overall, the journey along the Mississippi River symbolized a southern society that lacked the qualities of a civilized society while exploring the hypocritical views society pertains about civility. Blinded by their ignorant view of ?civilized? society, the people seen throughout Huck and Jim?s journey, are unable to settle disputes without violence, incapable to depict right from wrong yet create rules and laws defying logic, and practice slavery and degrading a race with religion back then giving way; verifying that their ?sophisticated? society is more of an illusion than a reality. Twain demonstrates an accurate portrayal of southern society during the pre-civil war time by the racial oppression that was present during that time. Blacks were degraded constantly while denied of freedom and liberty, defining southern society?s rigid ideals and hypocritical view of morality. Along with racial oppression was present was the basis of institution of religion that also demonstrated the hypocritical view of morality. (Valkeakari 2) In The Adventures of Huckleberry Finn, the Mississippi River symbolized the hypocritical view society retained regarding civility. From hypocritical view on civility to racial oppression, all helped to accurately depict the pre-civil war era. , Twain brings out a message from the outsets of Huckleberry Finn and Tom Sawyer, condemning society of its hypocritical deed of being this so called sophisticated morally correct society. Twain attacks the mindless acceptance of values that he believed kept the South in its dark ages during the pre-civil war era, in result restricting the South to move forward and advance towards success (Grant 4). ...read more.