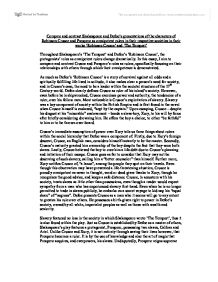 Compare and contrast Shakespeare and Defoe's presentations of the characters of Robinson Crusoe and Prospero as omnipotent rulers in their respective societies in their works 'Robinson Crusoe' and 'The Tempest' Throughout Shakespeare's 'The Tempest' and Defoe's 'Robinson Crusoe', the protagonists' roles as omnipotent rulers change dramatically. In this essay, I aim to compare and contrast Crusoe and Prospero's roles as rulers, specifically focusing on their relationships with others through which their omnipotence is demonstrated. As much as Defoe's 'Robinson Crusoe' is a story of survival against all odds and a spiritually fulfilling life lived in solitude, it also makes clear a person's need for society, and in Crusoe's case, the need to be a leader within the societal structure of the 17th Century world. Defoe clearly defines Crusoe as ruler of his island's society. However, even before he is shipwrecked, Crusoe exercises power and authority, the tendencies of a ruler, over his fellow men. Most noticeable is Crusoe's exploitation of slavery. Slavery was a key component of society within the British Empire and is first found in the novel when Crusoe himself is enslaved, "kept by the captain." Upon escaping, Crusoe - despite his disgust at his "miserable" enslavement - bends a slave-boy, Xury, to his will by force after briefly considering drowning him. He offers the boy a choice; to either "be faithful" to him or to be thrown over-board. Crusoe's immediate assumption of power over Xury tells us three things about rulers within the social hierarchy that Defoe was a component of. Firstly, due to Xury's foreign descent, Crusoe, an English man, considers himself instantly to be the master. ...read more.

This comparatively effortless saving of Friday's life on Crusoe's behalf causes Friday to, "set my foot upon his head...swearing to be my slave for ever." This is not an image of service; it is undoubtedly one of slavery. More noticeably, Crusoe teaches Friday to call him "master" before teaching him any other English. Friday's purpose it seems is as little more than reinforcement to Crusoe's emerging, omnipotent rule. Crusoe's intentions, however, are good, if conceited, as his reaction to Friday's willingness to serve him is: "I took him up...and encouraged him all I could." The fact that Friday possesses a faith other than Christianity causes Crusoe to call him a "poor savage". True, as Crusoe's faith has increased, so has his quality of life, but he dismisses the, "brutish and barbarous", savage's own beliefs, referring to his kind as "blinded, ignorant pagans". Many aspects of Crusoe, beside his language and religion are utterly alien to Friday, and Defoe presents these as instilling uncertainty and fear. In reaction to Crusoe shooting a goat with a musket, Friday, "came and kneeled down to me...to pray me not to kill him." Crusoe, recognizing his fright, chooses to abuse this new found power by loading the gun, "and not let him see me do it". Although Defoe describes the events with almost a farcical sense of humor, how it caused confused "astonishment", in, "the poor creature", the reader is more accustomed to Crusoe's mannerisms and recognizes how he is exploiting his omnipotence simply for the 'fun' of terrifying his only human company. Correspondingly, Prospero also possesses knowledge different to the natives he encounters. ...read more.

iii; "O, it is monstrous: monstrous: Methought the bellows spoke, and told me of it, The winds did sing to me: and the thunder (That deep and dreadful organ pipe) pronounc'd The name of Prosper". The elaborate and powerful language that Shakespeare uses to describe the King's fear is reflected in Prospero's own elaborateness as ruler and he simply, but terrifyingly, sums up his position of complete omnipotence in Act IV, scene i: "...at this hour lies at my mercy all mine enemies: Shortly shall my labors end, and thou Shalt have the air at freedom". Prospero is Shakespeare, in control of the characters' lives and ultimately, the plot. In no other Shakespearean play is one single character given such omnipotent rule, and in the Epilogue, Prospero likens himself to a playwright, asking the audience for their applause of his creation: "Let your indulgence set me free." In conclusion, both Defoe's character Robinson Crusoe and Shakespeare's Prospero are at times, if not permanently, omnipotent rulers over their fellows. Prospero differs from Crusoe in his conscious decision to end his rule whereas Crusoe cannot help but leave his "subjects" on his island to continue his legacy. Both their rules originate and increase due to possession of knowledge alien to the natives they come into contact with, and by saving lives in selfish acts of apparent chivalry. However, the protagonists' acts seem more significant, questionable even, to modern audiences and readers, who view the characters as r****t or presumptuous when they are merely adhering to the society into which they were created. Word Count: 2,765. Critical Opinions 1. Kevin Lucia: Critical article, 'The Imagined History of White Colonialism - Fantasy of the African Made Colonial'. http://www.associatedcontent.com/article/398632/the_imagined_history_of_white_colonialism.html ...read more.