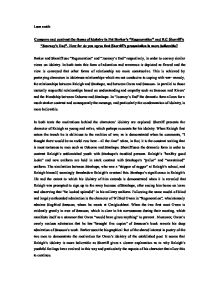 Compare and contrast the theme of idolatry in Pat Barkers Regeneration and R.C Sherriffs Journeys End. How far do you agree that Sherriffs presentation is more believable?

Luna smith Compare and contrast the theme of idolatry in Pat Barker's "Regeneration" and R.C Sherriff's "Journey's End". How far do you agree that Sherriff's presentation is more believable? Barker and Sherriff use "Regeneration" and "Journey's End" respectively, in order to convey similar views on idolatry. In both texts this form of adoration and reverence is depicted as flawed and the view is conveyed that other forms of relationship are more constructive. This is achieved by portraying characters in idolatrous relationships which are not conducive to coping with war- namely, the relationships between Raleigh and Stanhope, and between Owen and Sassoon - in parallel to those mutually respectful relationships based on understanding and empathy such as Sassoon and Rivers' and the friendship between Osborne and Stanhope. In "Journey's End" the dramatic form allows for a much starker contrast and consequently the message, and particularly the condemnation of idolatry, is more believable. In both texts the motivations behind the characters' idolatry are explored. Sherriff presents the character of Raleigh as young and na�ve, which perhaps accounts for his idolatry. When Raleigh first enters the trench he is oblivious to the realities of war, as is demonstrated when he comments, "I thought there would be an awful row here - all the time" when, in fact, it is the constant waiting that is most torturous to men such as Osborne and Stanhope. ...read more.

Sassoon is also arguably a questionable choice of role model for Owen in "Regeneration". This is demonstrated in Sassoon's Declaration, which is a historical document written by Sassoon during the war, in which he states that he intends to act in "willful defiance of military authority" in opposing the continuation of the war and hence shows his adversity to the current accepted value system of a war-torn society. Barker's decision to open the novel with this document serves both to set the context of the novel and to explain the motivations and feelings of her character. Sassoon faces great inner conflict and admits that at times he deliberately acted so as to "give [the Germans] plenty of opportunities" to kill him, which reveals the fragility of his character and the reality that he has undergone periods of mental instability which call into question his objectivity as a war poet (the aspect of his persona that Owen first came to admire). It is perhaps not advisable for Owen, who is also suffering from shell shock, to align himself with Sassoon, as such a friendship could possibly impede his own recovery. Alongside these disadvantageous relationships based on little more than misguided hero-worship, Sherriff and Barker present more constructive alternatives. ...read more.

We see both Stanhope struggle with his fear of the nature of Raleigh's fascination with him and the effect it may have on his relationship with Raleigh's sister, and we see Raleigh deal with the fact that the object of his idolatry is drastically changed. However, when Stanhope confiscates Raleigh's letter home he sees that Raleigh still sees him as "the finest officer in the battalion" and makes no mention of his flaws, despite the fact that Stanhope is still scathing of him and refers to him as "boy"; suggesting that he views Raleigh as childishly na�ve and not worth his attention. In "Regeneration" however, Owen's idolatry of Sassoon has little effect on Sassoon, but more so on Owen, who is "afraid to measure his loss" when the two part. Therefore both sides of the relationship are not explored and the extent of Owen's idolatry is not as explicit. Both texts raise the important question of who, if anyone, should be idolized and held up as a hero. Is it people like Stanhope, who face the many horrors of war yet who still go on "sticking it, month in, month out"? Or is it people like Sassoon, who are willing to transgress social norms and be seen as mentally unstable in order to profess their unpopular beliefs? Word count - 1599 [IS1]Substitute 'contrasts' [IS2]Wordy [IS3]Combine /compress these two [IS4]wrong ; [IS5]check [IS6]Rephrase succinctly ...read more.