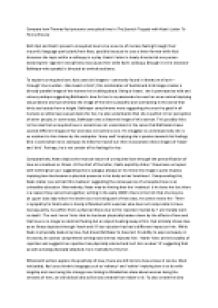 ﻿Compare how Thomas Kyd presents unrequited love in The Spanish Tragedy with Keat?s Letter To f***y Brawne Both Kyd and Keat?s present unrequited love to be a source of morose feeling through their mournful language particularly from Keat, possibly because he uses a letter format while Kyd discusses the topic within a soliloquy in a play. Keats?s letter is clearly directed at one person declaring the ?agonies? loving f***y has caused him while Kyd?s soliloquy (though it is the character Balthazar who speaks) is directed at a whole audience. To explore unrequited love, Kyd uses bird imagery - commonly found in literature of love ? through ?she is wilder?than beast or bird?; this combination of b*****l and bird image creates a directly parallel image of the women he is talking about. Being a ?beast?, she is portrayed as wild and vicious perhaps suggesting Balthazar?s love for her is so passionate he sees her as an animal implying s****l desire and l**t whereas the image of the bird is peaceful and contrasting in the sense that birds see beauty from a height. ...read more.

Kyd similarly shows love as an illness depicted through ?harsh and ill? but rejection has had a different impact on him. While Keats is physically beaten by love, Kyd shows Balthazar to have lost his ability to express beauty in his words; he cannot comprehend writing now she has rejected him. ?Harsh? hints at the brutality of rejection and suggests her rejection has physically scarred and hurt him as does ?ill? suggesting that as well as being physically attacked, he is mentally hurt by her. While both writers explore the positivity of love, there are still hints to how vicious it can be. Most noticeably, Kyd uses chivalric language such as ?valiancy? and ?nobler? implying love is to do with kingship and men being the stronger s*x linking to Elizabethan ideas about women being the servants of men, an old biblical idea as Eve was created from Adam?s rib. To also create the idea that love can be positive, Kyd incorporates an iambic rhythm to create a romantic tone; it suggests the soliloquy has carefully being controlled and that he is driven to express his love calmly. ...read more.

Similarly, Keats?s love will evoke peace and divinity. Overall, Keats and Kyd both depict unrequited love as one that cause?s physical pain and madness show by the personification of love as do the unsteady structures. Indeed, at times the writers are controlled in their writing. Keats at times writes in short snappy sentences but then develops into uses hyphens a number of times to imply confusion but also an unresolved feeling of conflict. He flits between his decisions as if having an internal argument within himself but then resumes his conventional sentence structure. Kyd, however, maintains a steady structure throughout. It could be that the writers are not at the same point of love. Keats is driven mad by love while Kyd?s character, Balthazar, is devoted to this woman but not yet mad with her rejections. However Kyd uses the anaphora of ?ay, but? as well as ?yet, might? showing also internal conflict and self-debate. She may love him but alternatively she will always look to reason for reasons why this cannot be possible suggesting sympathy for these desperate men. Therefore, overall, unrequited love is depicted as a desperate situation and morose for these writers. ...read more.