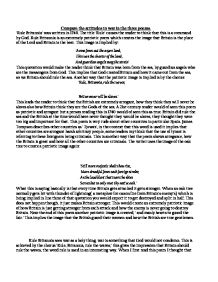 Compare the attitudes to war in the three poems.

Compare the attitudes to war in the three poems. 'Rule Britannia' was written in 1740. The title 'Rule' causes the reader to think that this is a command by God. Rule Britannia is an extremely patriotic poem which creates the image that Britain is the place of the Lord and Britain is the best. This image is implied by: 'Arose from out the azure land, This was the charter of the land, And guardian angels sung the strain' This quotation would make the reader think that Britain was born from the sea, by guardian angels who are the messengers from God. This implies that God created Britain and how it came out from the sea, so we Britain should rule the sea. Another way that the patriotic image is implied is by the chorus: 'Rule, Britannia, rule the waves; Briton never will be slaves.' This leads the reader to think that the British are extremely arrogant, how they think they will never be slaves also how Britain think they are the Gods of the sea. A 21st century reader would of seen this poem as patriotic and arrogant but a person reading this in 1740 would of seen this as true. Britain did rule the sea and the British at the time would have never thought they would be slaves, they thought they were too big and important for that. ...read more.

If it was a command from God it would mean that he was telling Britain to rule the sea so fight any wars they need to accomplish this. Rule Britannia is a very confident poem, no where in the poem does doubt creep in. . 'Rule, Britannia, rule the wave Briton will never be slaves' When you read this you see the image of people singing this loud, confident of what they have to do. This implies that this poem is for war, the writer James Tompson implies that war is a jolly thing something that has to be done, this is accomplished by the poem. The chorus of poem is meant to be sung, when I think of singing I associate it with singing things which are right and merry, it is not very often you sing about sad things, when the poem was written James tompson knew this and deliberately made it so the chorus would be sung. In Royal Britannia they poet fails to mention of the negative, he even goes to the extent of saying that war just makes Britain stronger, this can be seen in my third quote on page 1. This helps to build the confidence of the poem because no negatives have been mentioned; this is implying that there are no negative things about war. ...read more.