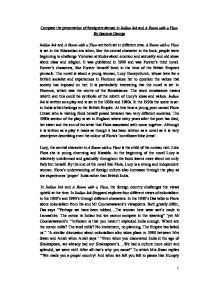 Compare the presentation of foreigners abroad in Indian Ink and A Room with a View.

Compare the presentation of foreigners abroad in Indian Ink and A Room with a View By Jasmine George Indian Ink and A Room with a View are both set in different eras. A Room with a View is set in the Edwardian era when, like the central character in the book, people were beginning to challenge Victorian attitudes about emotion and sexuality and old ideas about class and religion. It was published in 1908 and was Forster's third novel. Forster's characters, like Forster himself lived in the time of the British Empires pinnacle. The novel is about a young woman, Lucy Honeychurch, whose love for a British socialist and experiences in Florence cause her to question the values that society has imposed on her. It is particularly interesting that the novel is set in Florence, which was the centre of the Renaissance. The word renaissance means rebirth and this could be symbolic of the rebirth of Lucy's ideas and values. Indian Ink is written as a play and is set in the 1930s and 1980s. In the 1930s the scene is set in India which belongs to the British Empire. At this time a young poet named Flora Crewe who is visiting finds herself poised between two very different societies. The 1980s section of the play is set in England where sixty years after the poet has died, her sister and the son of the artist that Flora associated with come together. Although it is written as a play it reads as though it has been written as a novel as it is very descriptive describing even the colour of Flora's 'cornflower blue dress'. ...read more.

Charlotte Bartlett emphasises the worst snobbery and narrow-mindedness of her class, she is against Lucy's socialising and is completely unimaginative. British society in the time of Flora does not seem that different then society in the time of Charlotte. When Flora is talking about her 'scandalous' court case to Durance, she says how her sister had to leave school and be taken away through the crowd in a van because of the s****l content of her poems. Although the general attitudes of society are similar, Flora and Charlotte's attitudes to it in particular are very different from each other. Flora is much more relaxed towards it than Charlotte who takes the opinions of those around her very seriously - 'Miss Bartlett, much discomfited by the unpleasant scene. The shopman was possibly listening' (pp61). Freddy, Lucy's brother who is back home at Windy Corner, could also be used to show this typical English attitude towards class. He is too young to have been influenced by society's views. He likes George who could be seen as having a liberal attitude and dislikes Cecil who is Lucy's fianc� and looks down on anyone not of his class. The other characters, with the exception of the Emersons, have been affected by the pressures of class and approve of Cecil's engagement to Lucy. Lucy breaking off her engagement to Cecil shows how she challenges following what society thinks would be best for her. In Indian Ink Durance also has the common attitude of the English at the time of the Empire, whilst he tells Flora that he loves 'Indian' India, he feels superior to the Indians and goes to the club with the English community. ...read more.

Through Durance Stoppard presents how some of the English felt very superior to the Indians and how the cultures were so divided in some ways and yet overlapped in others. In A Room with a View Forster seems to be advocating socialism through Lucy as she becomes discontent with the life she had before and finds her true self when she falls in love with socialist George. As the two central characters in the novels grow more experienced in the countries they are in they each discover something about themselves. Flora discovers the notion of rasa and this helps her in her work, likewise Lucy discovers about emotions in the form of passion which changes her ideas and helps her decide to be with George. In A Room with a View the use of many English people means that their reactions can be compared for example the reactions of Mr Eager and the Emersons to the kiss were completely different. This highlights the fact that it is political difference between the characters that causes the different reactions and not cultural difference like in Indian Ink. In Indian Ink the English people interact a lot more with the native people than in A Room with a View, perhaps this is also to show the difference and similarities in the two cultures. Both writers use humour differently. Forster gently mocks his characters, he is not harsh and this allows the reader to develop affection for them. Stoppard's characters however are humorous themselves in the things that they say, this also allows for a deeper understanding of the characters but in a different way to Forster. The central characters in Indian Ink and A Room with a View are presenting Stoppard 's and Forster's ideas through their growing experiences and changing ideas in the foreign countries they are visiting. ...read more.