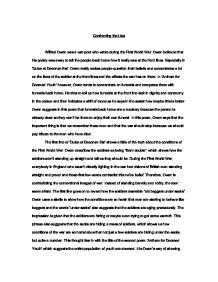 Confronting the Lies Wilfred Owen was a war poet who wrote during the First World War. Owen believed that his poetry was away to tell the people back home how it really was at the front lines. Especially in 'Dulce et Decorum Est', Owen really makes people question their beliefs and concentrates a lot on the lives of the soldier at the front lines and the effects the war has on them. In 'Anthem for Doomed Youth' however, Owen tends to concentrate on funerals and compares them with funerals back home. He tries to tell us how funerals at the front line lack in dignity and ceremony in the octave and then indicates a shift of mood as he says in the sestet how maybe this is better. Owen suggests in this poem that funerals back home are a mockery because the person is already dead so they won't be there to enjoy their own funeral. In this poem, Owen says that the important thing is that we remember these men and that the war should stop because we should pay tribute to the men who have died. The first line of 'Dulce et Decorum Est' shows a little of the truth about the conditions of the First World War. ...read more.

This line tells us how one soldier wasn't quick enough to put his gas mask on and now the gas has surrounded him like a sea of green and is now close to death. Owen tries to expose how dangerous the conditions of the First World War are in the use of words such as "helpless". This makes us understand how vulnerable the soldiers are to the dangers around them and the word "plunging" makes one picture a dying man reaching out in desperate need of help. The words, "In all my dreams before my helpless sight, He plunges at me," makes the reader realize what a horrific experience these youths are going through. At the end of this line, Owen uses the words "guttering, choking, drowning" which are a repetition of the '-ing' sound. This brings the poem into the present tense and makes the scene come alive to the reader and implies that the war is a continuing trauma. The repetition makes the point get across that the conditions really were awful. Owen describes his dreams to be "smothering" whilst one would usually associate dream as being pleasant and peaceful and makes us realize how different things are at the front line and how even the dreams are traumatic. ...read more.

This means that the expression on the girls' forehead when you hear the news back at home will be the soldiers' pall and the silence in their minds shall be their flowers and this is the most fitting way to remember the dead soldiers. Owen is directly addressing the reader like he does in "Dulce et Decorum Est" and saying I tried to warn you how bad it was but you didn't listen and now look what has happened. He concludes the poem saying that when dusk falls, it is nature's way of drawing the blinds and thus nature is mourning the youth. I believe that both "Dulce et Decorum Est" and "Anthem for Doomed Youth" expose the truth about the conditions during the First World War very well. Owen believed that his poetry was a way for him to tell the truth about the conditions of the First World War for others who couldn't speak up for themselves for example, the man who died in "Anthem for Doomed Youth." Owen knew it was very difficult for people to speak up and to contradict the voice of authority and to challenge the official story of the war, but he, through his poetry, was able to just this. ...read more.