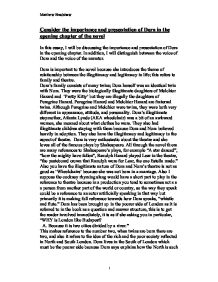 Consider the importance and presentation of Dora in the opening chapter of the novel In this essay, I will be discussing the importance and presentation of Dora in the opening chapter. In addition, I will distinguish between the voice of Dora and the voice of the narrator. Dora is important to the novel because she introduces the theme of relationship between the illegitimacy and legitimacy in life; this refers to family and theatre. Dora's family consists of many twins; Dora herself was an identical twin with Nora. They were the biologically illegitimate daughters of Melchior Hazard and 'Pretty Kitty' but they are illegally the daughters of Peregrine Hazard. Peregrine Hazard and Melchior Hazard are fraternal twins. Although Peregrine and Melchior were twins, they were both very different in appearance, attitude, and personality. Dora's illegitimate stepmother, Atlanta Lynde (AKA wheelchair) was a bit of an awkward women, she moaned about what clothes he wore. They also had illegitimate children staying with them because Dora and Nora believed heavily in adoption. They also have the illegitimacy and legitimacy in the aspect of theatre. Dora is very enthusiastic about the theatre and she loves all of the famous plays by Shakespeare. ...read more.

They have a very old dress sense but still they choose to dress that way. She values her looks very much. Dora is a very direct character and this is proved with her attempt to introduce herself on the first page when she says "Good morning! Let me introduce myself. My name is Dora Chance. Welcome to the wrong side of the tracks," so again it refers to the poorer side of London. In addition, her relationship is established with the world and she is not afraid to criticise it. A good reference to their poverty is "and finally snuff it disregarded on the street and blow away like rags," this shows that their poverty affected their clothes in theory, because usually people who are poverty stricken tend to have tattered, old clothes and they are referred to as being 'rags'. Again touching on what I said in a previous statement, she likes to look after her appearance, this is proved when it says, "We put on our faces" and also "Max-factor panstick," "the false eyelashes with the three coats of mascara" and the best quote I think is when she says, "our fingernails match our toenails match our lipstick our rouge", this shows that she is that concerned about their appearance that they are bothered that their lipstick, toenails and fingernails all should be the same colour. ...read more.

The treatments of the events are supported with use of asides. We have references of events and characters that we have no knowledge of. For example, Pretty Kitty, all we know is that she is the mother of Nora and Dora, and that she died giving birth to them. We know nothing else about her at all. Then that Tiffany was found floating in the river, we do not know if she was murdered and had been put there by someone else or if she had just committed suicide. The use of flashbacks fills in events by moving between past and present. They do this when they start to refer to Melchior and his theatre career and then coming back to the present with Dora doing some form of activity. Most of the events are also chronological. The intertexuality is that much of the novel depends on the readers' knowledge of one text in order to understand events and meaning in this one. An example of this is the significance of the references to Shakespeare's plays. The language used in the novel is very complex. There are idioms of the elderly and of the 1940's, this shows Dora's age and experience. In addition, the use of cockney rhyming slang gives us a sense of time and place. ...read more.