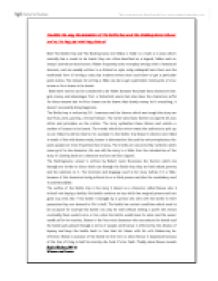 Consider the way the characters of The Bottle imp and the Rocking-horse Winner end up. Do they get what they deserve?

Consider the way the characters of The Bottle imp and the Rocking-horse Winner end up. Do they get what they deserve? Both The Bottle Imp and The Rocking horse are fables; a fable is a myth or a story which normally has a moral to be learnt they are often described as a legend, fables such as Aesop's animal are best known. Fables frequently unite everyday settings with a fantastical element, and are usually written in a distinctive style using colloquial lexis there are the traditional form of writing a story but modern writers have used them to get a particular point across. The reasons for writing a fable can be to get a particular moral point of view across or for a lesson to be learnt. Both these stories can be considered to be fables because they both show characters that gain money and advantages from a fantastical source but also show the characters suffer for these reasons due to this a lesson can be learnt that clearly money isn't everything, it doesn't necessarily bring happiness. The Bottle Imp is written by D.H. Lawrence and the themes which run trough the story are sacrifices, love, poverty, evil and fortune. The writer uses these themes to express his own ethics and principles on the matter. The story symbolises these themes and contain a number of lessons to be learnt. The morals which the writer wants the audience to pick up on are linked to all the themes for example: In the Bottle imp Keawe's relatives are killed in result of the wish keawe made, keawe is distressed at this and the writer emphasises the point people are more important then money. ...read more.

As the story went on Keawe sold the bottle to his friend Lopaka this shows he was caring as he didn't keep the bottle to himself and wanted all the wealth or fortune. When Keawe had sold the bottle and fell in love with Kokua he discovered he had leprosy, once this was discovered Keawe decided to track down the bottle and wish for it to disappear but there was a complication the price of the bottle decreased to only two cents so Keawe was the one who would die with the bottle and suffer the consequences as there was no money in Hawaii which had less value then one cent. Knowing this Keawe brought the bottle for the love of Kokua this showed how much he valued her as he was willing to sacrifice his soul for her. This action however caused great distress to him later in the marriage as he was having images of himself burning in the hell fire and was oblivious to the world around him including the love of his life Kokua. Near the end when Keawe decided to confine in his wife and she revealed the currency in France had money which was lower then the cent so they went the sell the bottle, they had no luck until kokua tricked Keawe in to selling her the bottle. When Keawe discovers this he is furious and instead of being relieved that he will not suffer in hell he attempts to sacrifice his soul for her. ...read more.

I believe no mother who deserves to loose their child. Paul was the main character and I reflect he didn't deserve to die as he first became involved in gambling through influences of his uncle and Bassett he was first involved with gambling. Paul was young, vulnerable he was an adolescent he didn't know better, and if his mother wasn't so pessimistic about money and luck he wouldn't have been in this situation in the first place. So therefore I think his final outcome was unnecessary and inequitable. The batsman Bassett didn't deserve what he got as I believe he should have suffered. The reason for why I think he should is because he encouraged and allowed a young child gamble without the consent of his parents this is both irresponsible and unjust as Bassett was selfish. Lastly Uncle Oscar didn't get what he deserved as he was self-centred and inconsiderate to his sister Hester by allowing and encouraging Paul's gambling. As well as being inconsiderate to Hester he was also insensitive to Paul because whilst Paul was unconscious and suffering he insists to place a bet on Paul's word. Analysing both poems I've discovered both poems reinforce the idea of money is not everything and teaches money has its consequences. The importance of family life is higher then any amount of money also the value of life. The Rocking-horse teaches that love should be un-conditional and the bottle imp reinforces the previous ideas of money. I enjoyed both stories greatly and believe the authors succeeded in their morals. Sadia Shahzad 9134 Winners and Losers ...read more.