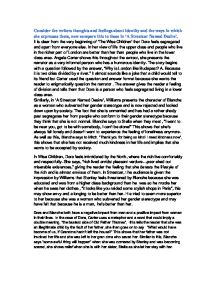 Consider the writers thoughts and feelings about identity and the ways in which she expresses them, now compare this to those in A Streetcar Named Desire

Consider the writers thoughts and feelings about identity and the ways in which she expresses them, now compare this to those in 'A Streetcar Named Desire'. It is clear from the very beginning of 'The Wise Children' that Dora feels segregated and apart from everyone else. In her view of life the upper class and people who live in the richer part of London are better than her than people who live in the lower class area. Angela Carter shows this throughout the extract, she presents the narrator as a very informal person who has a humorous identity. The story begins with a question followed by the answer, "Why is London like Budapest? A. Because it is two cities divided by a river." ...read more.

The fact that she is unmarried and has had a rather shady past segregates her from people who conform to their gender stereotype because they think that she is not normal. Blanche says to Stella when they meet, "I want to be near you, got to be with somebody, I can't be alone!" This shows that she's always felt lonely and doesn't want to experience the feeling of loneliness anymore. As well as this, Blanche says to Mitch, "Thank you for being so kind! I need kindness now", this shows that she has not received much kindness in her life and implies that she wants to be accepted by society. In Wise Children, Dora feels intimidated by the North, where the rich live comfortably and respectfully. ...read more.

Dora and Blanche both have a negative impact from men and a positive impact from women in their lives. In the case of Dora, Carter uses a metaphor and a word that could imply a double meaning, "the b*****d side of Old Father Thames", this tells the reader that she was an illegitimate child by the fault of her father, she then goes on to say "What would have become of us, if Grandma hadn't left the house?" This shows that her father was not involved her life and she was left to her grandma who saved her. Similar to this, Blanche says "some awful thing will happen" when she was cornered by Stanley and was becoming scared, she shows relief when she is with her sister, Stella as she let her stay with her. ...read more.