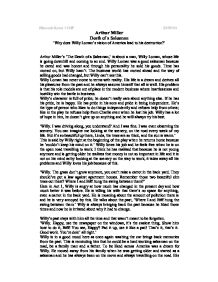 Death of a Salesman 'Why does w***y Loman's vision of America lead to his destruction?'

Arthur Miller Death of a Salesman 'Why does w***y Loman's vision of America lead to his destruction?' Arthur Miller's 'The Death of a Salesman,' is about a man, w***y Loman, whose life is going downhill and coming to an end. w***y Loman was a good salesman because he cared and was honest and through his personality he sold his goods. Time has moved on, but w***y hasn't. The business world has moved ahead and the way of selling goods had changed, but w***y can't see this. w***y Loman has never come to terms with reality. His life is a dream and derives all his pleasures from the past and he always assures himself that all is well. His problem is that his role models are out of place in the modern business where heartlessness and hostility win the battle in business. w***y's character is full of pride; he doesn't really care about anything else. If he has his pride, he is happy. He has pride in his sons and pride in being independent. He's the type of person who likes to do things independently and refuses help from others; like in the play he refuses help from Charlie even when he lost his job. ...read more.

His main aim was to be liked but he failed that and then he was fooling himself and his sons that he was really liked by people. 'w***y. ...And they know me, boys, they know me up and down New England. The finest people...I have friends. I can park my car in any street in New England, and the cops protect it like it's their own.' w***y is saying this to his sons as if he is liked a lot and he is well known by people but he is lying just to make things better. He doesn't want to sound like a failure to his sons, he wants his sons to be proud of him and he thinks lying might help hi sons want to follow in the same footsteps as their father. Arthur Miller shows the two sides of "The American Dream" in the play. Miller shows this through the two characters, Biff and Happy Loman. Biff supports the frontier myth; he wants to work outside with animals on ranches, while Happy wants to be a big success in the business world. ...read more.

Biff and w***y argue a lot in this play. After graduating from high school, Biff lost a lot of his respect for his father. It's not until act 1, page 52 that Biff thinks about his fathers life. He has an argument with Linda, his mother, and she reveals that he has been trying to kill himself, and he is only happy when he hears from Biff. w***y knows he has failed in life and he knows there is not much left for him. He was a man full of pride but has realized there is nothing really to be proud of. He knows he cannot move on from the past, and only figured out one way of succeeding. At the end of the play he commits suicide by purposely crashing his car. He does this because he thinks family will benefit from his life insurance money and they can finally pay off the bills so they can be out of debt for once. This shows that w***y Loman really cared about his family and killed himself for them. This shows the real w***y Loman, he was very caring and determined and he knew there was nothing left in his life so he helped the people he loved. ...read more.