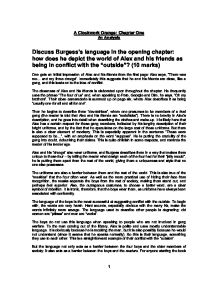 Discuss Burgess&amp;#146;s language in the opening chapter: how does he depict the world of Alex and his friends as being in conflict with the &amp;#147;outside&amp;#148;? (10 marks)

A Clockwork Orange: Chapter One An Analysis Discuss Burgess's language in the opening chapter: how does he depict the world of Alex and his friends as being in conflict with the "outside"? (10 marks) One gets an initial impression of Alex and his friends from the first page: Alex says, "There was me... and my three droogs". Immediately this suggests that he and his friends are close, like a gang, and this leads on to the idea of conflict. The closeness of Alex and his friends is elaborated upon throughout the chapter. He frequently uses the phrase "The four of us" and, when speaking to Pete, Georgie and Dim, he says, "Oh my brothers". Their close camaraderie is summed up on page six, where Alex describes it as being "usually one for all and all for one". Then he begins to describe three "devotchkas", whom one presumes to be members of a rival gang (the reader is told that Alex and his friends are "malchicks"). There is no brevity in Alex's description, and he goes into detail when describing the clothes and make-up. ...read more.

The boys do not use this language when speaking to people who are not involved in gang warfare. To the man coming out of the library, Alex is polite and uses mostly understandable language. It is obviously because he is mocking the man, but it is also possibly because he would not understand (since it seems that he speaks normally). So this is their language, something they use to each other. This is a straightforward example of their conflict with the "outside". But the language not only acts as a barrier between the four boys and the older members of society: it also acts as a barrier between the boys and the readers. For anyone starting the book for the first time, the words used are baffling, and it takes a lot of getting used to. What is more, Alex feels the need to explain what some of the words mean: "...a rooker (a hand, that is)". It is at this point that the readers become, in effect, a part of the society that Alex is rebelling against. ...read more.

This is backed up by the fact that any kind of law enforcement is not mentioned until later in the chapter. These "millicents" are obviously not important and Alex and his friends can easily outsmart them. So, in effect, there is no law enforcement. Early on, the only indication that some sort of legal system exists is the fact that "mestos" were not licensed to sell liquor (which does not seem to stop them any way). Another aspect of society that is not missing, but seems unpopular, is that of literature. Alex reports that "newspapers {are not} read much" - whether this is because of illiteracy or just lack of interest, one is unsure. The Public Biblio, which is the derelict-sounding municipal library, was something that "not many lewdies used those days". Again, the reason why is not clear. Owing to the other "past-times" of the day, namely ultra-violent criminal activities, it is likely that nobody is interested in literature any more. This certainly fits in with the way in which Alex and his friends persecute a man just because they saw him coming out of the library with books in his hand. ...read more.