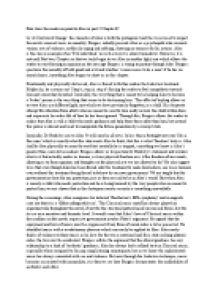 How does the reader respond to Alex in Part 2 Chapter 6 of A Clockwork Orange?

﻿How does the reader respond to Alex in part 2 Chapter 6? In ?A Clockwork Orange? the character of Alex is both the protagonist and the vessel used to impart the novels unusual views on morality. Burgess initially presents Alex as a psychopath who commits various acts of violence, ruthlessly r****g and robbing, showing no remorse for his actions. Alex is the classic example of an ?Evil individual? in such a way it is almost unrealistic. However, it is not until Part two, Chapter six that we truly begin to see Alex in another light, one which allows the reader to start forming an opinion on the message Burgess is trying to portray through Alex. Burgess questions the morality of both good and evil and whether ?a man ceases to be a man? if he has no moral choice, something Alex begins to show us in this chapter. Emotionally and physically distressed, Alex is forced to further endure the Ludovico treatment. Helplessly, he screams out ?Stop it, stop it, stop it? forcing the reader to feel sympathetic towards him and somewhat disturbed. ...read more.

Burgess allows us to question Dr Brodsky?s statement and wonder what is it that actually makes us human, is it our physical freedom or is it the freedom of our minds, allowing us to form opinions and thoughts on the physical acts we are allowed to do? He also suggest to us that even though Alex has been forced into this treatment to make him behave, are we as humans even without this treatment being forced to behave by our own government. We are taught that the government are here for our protection, just as they are said to be in Alex?s world. But when Alex is merely a child who needs protection and he is being harmed by the very people who are meant to protect him, we are shown that in this dystopian society security is something unavailable. During the screenings, Alex recognises his beloved ?Beethoven?s fifth symphony? and in anguish cries out that it is a ?filthy unforgivable sin?. This Classical music motif has always played an important role throughout the novel, if not for the structural pattern based on musical forms, but for its use on a narrative and thematic level. ...read more.

The more Alex cries out for help and for the treatment to stop, the more the doctors seem to revel in his pain and rejoice that the treatment is working. Dr Brodsky says to Alex ?You?re doing really well? and that the treatment was ?first class?. However we cannot help but once again see Alex as the child he is as typically a line such as ?You?re doing really well? would be delivered to a child as encouragement that they are making progress and that whatever it is, is for the best. But this just shows Burgess? wider message and how dystopian this society really is where those who are meant to guide others and help them are maliciously deceiving them for their own gain. What is even more saddening to the reader is when Alex realises this ?as he says ?An act of treachery? ? and once again Alex living this dystopian world has been let down by everyone who is meant to have his best interests at heart. But then again, can we blame all of these clockwork windup toys, who ultimately have become the play toys of a powerful state? ...read more.