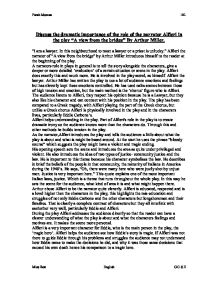 Discuss the dramatic importance of the role of the narrator Alfieri in the play &amp;#147;A view from the bridge&amp;#148; By Arthur Miller.

Discuss the dramatic importance of the role of the narrator Alfieri in the play "A view from the bridge" By Arthur Miller. "I am a lawyer. In this neighbourhood to meet a lawyer or a priest is unlucky." Alfieri the narrator of "A view from the bridge" by Arthur Miller introduces himself to the reader at the beginning of the play. A narrators role in plays in general is to tell the story alongside the characters, give a deeper or more detailed 'evaluation' of a certain situation or scene in the play. Alfieri does exactly this and much more. He is involved in the play aswel, as himself. Alfieri the lawyer. Arthur Miller has written the play to use a lot of audience emotions and feelings but has cleverly kept these emotions controlled. He has used calm scenes between those of high tension and emotion, but the main method is the 'chorus' figure who is Alfieri. The audience listens to Alfieri, they respect his opinion because he is a Lawyer, but they also like his character and can connect with his position in the play. ...read more.

He says, "Oh, there were many here who were justly shot by unjust men. Justice is very important here." This quote explains one of the most important Italian laws, justice. Which is a theme that runs throughout the whole play. In this way he sets the scene for the audience, what kind of area it is and what might happen there. Arthur chose Alfieri to be the narrator quite cleverly. Alfieri is educated, respected and is a level higher then the characters in the play, this highlights the mis-education and struggles of not only Eddie Carbone and the other characters but longshoremen and their families. That is clearly a complete contrast of characters but they all interlink with eachother very well, particularly Eddie and Alfieri. During the play Alfieri addresses the audience directly so that the reader can have a clearer understanding of what the play is about and what the characters feelings and motives are. It makes the scene more personal. Alfieri is a very important character for Eddie, who is the main person in the play, the 'tragic hero'. ...read more.

He says, "I no longer keep a pistol in my filing cabinet" Which suggests he was aware that the basis of solving a problem the Italian way was by using violence. Alfieri has also been seen in the play as 'omnipresent' as if he was a god- like figure or guardian angel for Eddie. He comes in and out of the play when Eddie needs moral guidance and advice about his situation. Eddie goes to Alfieri as a lawyer but also as a friend. Similarly to how people would turn to God when in need. The way he updates the audience periodically suggests that he is watching over the characters. Alfieri's character could be described as tough but calm, he deals with a hard situation when advising Eddie but manages to handle it quite well and set Eddie straight when he was on the wrong path. Alfieri represents success in the play. He is not an Italian longshoreman like most of the other people in that community, he is an educated lawyer with money a wife and what you might associate with a successful man. ?? ?? ?? ?? Farah Muman 10L Miss b**t English G.C.S.E ...read more.