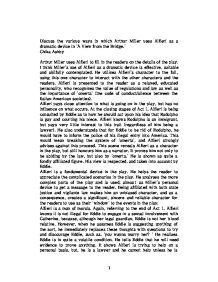 Discuss the various ways in which Arthur Miller uses Alfieri as a dramatic device in &amp;#145;A View from the Bridge.&amp;#146;

Discuss the various ways in which Arthur Miller uses Alfieri as a dramatic device in 'A View from the Bridge.' Chika Ashby Arthur Miller uses Alfieri to fill in the readers on the details of the play. I think Miller's use of Alfieri as a dramatic device is effective, suitable and skilfully contemplated. He utilizes Alfieri's character to the full, using this one character to interact with the other characters and the readers. Alfieri is presented to the reader as a relaxed, educated personality, who recognizes the value of regulations and law as well as the importance of �omerta� (the code of conduct/silence between the Italian American societies). Alfieri pays close attention to what is going on in the play, but has no influence on what occurs. At the closing stages of Act 1, Alfieri is being consulted by Eddie as to how he should act upon his idea that Rodolpho is gay and courting his niece. ...read more.

Alfieri is a man of morals. Again, referring to the end of Act 1, Alfieri knows it is not illegal for Eddie to engage in a s****l involvement with Catherine, because, although her legal guardian, Eddie is not her blood relative. However, when he assumes Eddie is suggesting anything of the sort, he immediately replaces these thoughts with questions to try and discourage Eddie, such as, �you wanna marry her? � He realises Eddie is in quite a volatile condition. He tells Eddie that he will need evidence to prove anything. It shows Alfieri is trying to help on a personal basis, but, he is a lawyer and he cannot help unless he is administered proof that Rodolpho is gay or is marrying Catherine for immigration. I think the title of the play can also refer to Alfieri's character. �A view from the bridge� could exemplify the bridge between the characters, Eddie and Rodolpho, or the social bridge between the play and its audience. ...read more.

He gives the impression that he could be greater in his profession when he states, �my practice is entirely unromantic�, it's a modest practice, but he is aware of this, almost as if he chooses to be a minor in his league. Nevertheless, he is still looked up to by the dockers and labourers, and he probably enjoys helping those who are usually neglected. This adds humbleness to his character and makes him more of someone to look up to as a reader. It seems as though, during the two acts of this play, even Alfieri has gathered a slight understanding of the bridge between law and fairness. Since the beginning of the play, we see Alfieri's views change to some extent as he is undergoing this significant �learning process�. We can notice this as he changes from saying �law is very important here� to �justice is very important here�. I assume Miller used these two inputs purposefully to illustrate how the characters views on �omerta� had intensified after witnessing the consequences of breaking this highly appraised, time-honoured law. ?? ?? ?? ?? 1 ...read more.