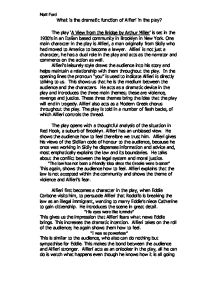 The play 'A View from the Bridge by Arthur Miller'.

The play 'A View from the Bridge by Arthur Miller' is set in the 1930's in an Italian based community in Brooklyn in New York. One main character in the play is Alfieri, a man originally from Sicily who had moved to America to become a lawyer. Alfieri is not just a character, he has a dual role in the play and acts as the narrator and comments on the action as well. Alfieri's leisurely style draws the audience into his story and helps maintain a relationship with them throughout the play. In the opening lines the pronoun "you" is used to indicate Alfieri is directly talking to us. This shows us that he is the medium between the audience and the characters. He acts as a dramatic device in the play and introduces the three main themes; these are violence, revenge and justice. These three themes bring the idea that the play will end in tragedy. Alfieri also acts as a Modern Greek chorus throughout the play. The play is told in a number of flash backs, of which Alfieri controls the thread. ...read more.

This makes the audience trust him more and agree with his opinions making it easier for him to influence the audience's views on what is happening. Alfieri tells Eddie that there is nothing they can do within the law, however they both know that within the Sicilian code of honour the situation is deemed wrong. "I don't quite understand what I can do for you is there a question of law somewhere?" Both characters watch on hopelessly, as do the audience. Eddie is a desperate man, looking for someone to confide in, as he is jealous of his niece Catherine and Rudolpho's relationship and does not think Rudolpho is good enough for her. Alfieri acts as Eddies confident in the play. He lets us see and feel Eddies' struggle to articulate his fears. This increases the audiences' sympathy and is another example of dramatic function. Alfieri introduces Act Two, in a good-humoured manner. He sets the scene and introduces a new device which moves time forward, to set the scene at a new date. "On the twenty-third of that December" This is a useful device, which Alfieri uses as the narrator. He is an effective dramatic device. ...read more.

It is he who attempts to place the events of the drama in context and explain to the audience that conflicts such as those related in the play occur throughout Italian and Sicilian history. Alfieri talks about it being "better to settle for half" and about liking that better because, quite often, the search for absolute justice results in unacceptable consequences. He realizes that the law is limited and cannot deal with every human problem fully. He explains the boundaries to both Marco and Eddie but, even though in his heart he knows they will ignore what he has to say to them, he cannot take further action to prevent the conflict. Arthur Miller has not drawn Alfieri as a full "flesh and blood" character even though at times we feel sympathy for his predicament. Alfieri's role is to oversee the action and remain objective throughout. The audience can see, at the end of the play that Alfieri does have sympathy for Eddie and even some admiration for him because "he allowed himself to be wholly known". And that is Alfieri's most important role. He offers the audience universal concepts. Matt Ford What is the dramatic function of Alfieri in the play? ...read more.