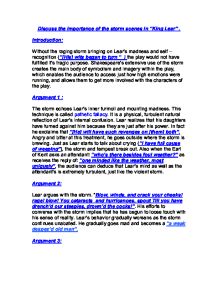 Discuss the importance of the storm scenes in &quot;King Lear&quot; .

Discuss the importance of the storm scenes in "King Lear" . Introduction: Without the raging storm bringing on Lear's madness and self - recognition ("[His] wits began to turn "_) the play would not have fulfilled it's tragic purpose. Shakespeare's extensive use of the storm creates the main body of symbolism and imagery within the play, which enables the audience to access just how high emotions were running, and allows them to get more involved with the characters of the play. Argument 1 : The storm echoes Lear's inner turmoil and mounting madness. This technique is called pathetic fallacy. It is a physical, turbulent natural reflection of Lear's internal confusion. Lear realizes that his daughters have turned against him because they are just after his power. ...read more.

"Blow, winds, and crack your cheeks! rage! blow! You cataracts and hurricanoes, spout Till you have drench'd our steeples, drown'd the c***s!". His efforts to converse with the storm implies that he has begun to loose touch with his sense of reality. Lear's behavior gradually worsens as the storm continues unabated. He gradually goes mad and becomes a "a weak despes'd old man". Argument 3: At the same time, the storm embodies the awesome power of nature, which forces the powerless King to recognize his own mortality and human frailty as well as to cultivate a sense of humility for the first time. He realizes that "man's life is as cheap as beasts". The storm shows the power of nature, which is a force that not even a King is safe from. ...read more.

Thus, the storm seems both to point out the weakness of Lear's royal power in the face of nature supremacy and to imply that the gods are angry at the state of human affairs. Such anger is likely directed not only at Lear's enemies for their ruthless and cruel ambition but also at Lear for his initial callous treatment of Cordelia. Argument 5: Finally, the meteorological chaos also symbolizes the political disarray that has engulfed Lear's Britain. ("then shall the realm of Albion come to great confusion"). In fact the Fool points out that Lear's state is a "scatter'd kingdom". Conclusion: The storm play a crucial part in aiding Lear's tragic decline. In this "piteous tale of Lear" the weather is used as a function to let the audience fully understand the meaning of Lear's catharsis. ...read more.