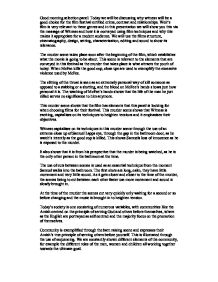 discuss the relevence of witness to a film festival entited crime, contrast and relationships

Good morning selection panel. Today we will be discussing why witness will be a good choice for the film festival entitled crime, contrast and relationships. Weir's film is very relevant to these genres and in this presentation we will show you this via the message of Witness and how it is conveyed using film techniques and why this makes it appropriate for a modern audience. We will use the films structure, cinematography, design, setting, characterisation, editing and sound to show its relevance. The murder scene takes place soon after the beginning of the film, which establishes what the movie is going to be about. This scene is relevant to the elements that are conveyed in this festival as the murder that takes place is what attracts the youth of today. When McFee kills the good cop, close ups are used to exemplify the excessive violence used by McFee. The slitting of the throat is seen as an extremely personal way of kill someone as opposed to a stabbing or a shotting, and the blood on McFee's hands shows just how personal it is. ...read more.

We are constantly shown different elements of the community, for example the different roles of the men, women and children all working together towards the ultimate goal. The men coordinate their efforts in order to establishing the barn; the women are taking care of the men's needs whilst they build the barn, whilst also preparing lunch. Even the children are seen to be making an effort to help the community. Through the use of a low angle long shot we can see the united effort of the men to the cause of helping their community members. Isolation is shown though John Book as he seems to isolate himself from his surroundings. It's shown that he try's to father his sisters children even though he lacks parenting skills and his best friend is his work partner Carter who's soon killed by the evil Trio (Schaeffer, McFee, Fergie). When book is immersed into the Amish community he begins to fathom some sense of community in the barn raising scene when he works in conjunction with the other men, and is seen being friendly with his "competition" Daniel. ...read more.

The music comes on and the camera focuses on the characters looking at each other as they express their emotions through the use of eye contact, facial expressions and non verbal conversations. The music used communicates the growing nature of their relationship. The director uses close-ups on the pair's faces, expressing the two's ability to come at ease with each other. Dim lighting is also used in order to set the scene as the one where John and Rachel finally become comfortable with each others presence. The two communities have contrasting idealisations when it comes to relationships. John is used to only having his sister to gain a sense of relationships, were he sees him self as the father of his sisters children, whereas Rachel has the whole Amish community. This is shown through the mise-en-scene, the Amish character's are always shown together and rarely alone, for example, the barn raising scene and travelling to town. Book on the other hand is more often then not individualised. This is noted specifically after the barn raising scene when the male Amish begin singing in German This relationship is seen as appropriate for a modern day audience as most relationships within our society consist of elements of change and contrast. ...read more.