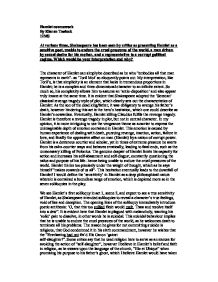 Hamlet coursework By Kieran Teeluck 12MS At various times, Shakespeare has been seen by critics as presenting Hamlet as a sensitive poet, unable to endure the cruel pressures of the world, a man driven by sexual desire for his mother, and a representative to a corrupt political regime. Which would be your interpretation and why? The character of Hamlet can simply be described as he who "embodies all that man represents in earth"- as 'Toril Moi' so eloquently points out. My interpretation, like Toril's, is that simplicity is an element that lacks in tremendous proportions in Hamlet; he is a complex and three-dimensional character to an infinite extent. So much so, his complexity allows him to assume an 'antic-disposition' and also appear truly insane at the same time. It is evident that Shakespeare adopted the 'Senecan' classical revenge tragedy style of plot, which clearly sets out the characteristics of Hamlet: As the son of the dead king/father, it was obligatory to avenge his father's death, however hindering this act is the hero's hesitation, which one could describe as Hamlet's cowardice. Eventually, Hamlet killing Claudius fulfils the revenge tragedy. Hamlet is therefore a revenge tragedy in plot, but not in central character. In my opinion, it is more intriguing to use the vengeance theme as a carrier to express the unimaginable depth of emotion contained in Hamlet. This emotion is caused by human experience of dealing with death, pursuing revenge, inaction, action, failure in love, and finally the oppressive affect on man (Hamlet) by a nation of corrupt power. Hamlet is a dexterous courtier and scholar, yet in times of extreme pressure he averts from his calm-courtier ways and behaves erratically, leading to fatal ends, such as the unnecessary killing of Polonius. The genuine despair of Hamlet limits his capacity for action and increases his self-abasement and self-disgust, constantly questioning the value and purpose of his life- hence being unable to endure the cruel pressures of the world. ...read more.

Hamlet had every reason to be afraid of the ghost, yet he was brave! Hamlet is very intelligent, having studied at Wittenberg university, where his great ability to think was born. It seems that his intelligence, and character flaw combined produces his ability to organise the "mouse-trap", to catch the "king's conscience". The intelligence segment can be seen in his organisation skills of the play, and also in his keen knowledge of theatre: "the rugged Pyrrhus, like th' Hyrcanian beast...With eyes like Carbuncles" says Hamlet with "good accent and discretion". I believe the "mouse-trap" is a mere result of Hamlet's character flaw- a delay tactic. One may claim that the "mouse-trap" is decisive action on Hamlet's part, that he does it to ensure the veracity of what the ghost explained. However, I feel that Hamlet still speculates far too much, like he speculated before on the "course of nature" and his "one defect", he speculates now on his father, that he may be the "devil". Hamlet uses the "devil" issue as an excuse to delay, because although ghosts were seen as evil, the dead king seems honest. For instance, he gives a true, loving account of Gertrude: "radiant angel...in a celestial bed", which corresponds to their ideal marriage: "he who was so loving to her.... she hang upon him". It can therefore be said that everything Hamlet enacts must be in the interest of moral justification, thus finding resolve to act. How can we believe that Hamlet will find resolve to act, especially in considering his contradictory nature: "I'll wipe away all trivial fond records, All saws of books, all forms...." promises Hamlet, that he will never turn to education again, instead the ghost's "commandment all alone shall live within the book and volume of" his brain. However, the next thing Hamlet does is turn to education by "writing" down his resolve, which is what he previously said he'd never do- He is contradicting himself. ...read more.

Nevertheless, it is too late for Gertrude as she soon perishes to her death at the hands of corruption: "the drink...I am poison'd". The character of Laertes also falls victim to Claudius' scheming ways, in being in a heightened state of anger (over his father's death and his sister's madness), accepting Claudius' sly persuasiveness: "Our life...all that is ours", finally agreeing that he should enact Claudius' plotting to "let the axe" on Hamlet "fall". Infact, Hamlet represents what Laertes is not, but unfortunately, like Gertrude, it is too late for Hamlet. Hamlet's speculative nature into the abuses of power in a corrupt political regime finally pays off, as Hamlet cuts out the "poison" in Denmark by killing Claudius, as Rosencrantz and Guildernstern find out by paying a dearer price than they bargained for! In conclusion, the character of Hamlet is so complex that even we, the audience, are unable to interpret whether Hamlet's "antic-disposition" is consistent, or in times of great passion, real madness is possessed by Hamlet - For example in the closet scene and when he jumps onto Ophelia's coffin. The play shows an insight into the political system of queen Elizabeth, and of its abuse and misconduct of power. Hamlet employs a fake madness to avoid corruption in the way he manipulates others to deliver justice - making him adverse to the corrupt political regime. At the heart of the play is the battle between Claudius and Hamlet, and how their relationship affects other characters and the plot, e.g. Affects his mum and Ophelia, both of whom Hamlet resents. The sensitive poet hamlet can be seen in the first half of the play, whose soliloquies of striking, ironic images show a 'suicidal' Hamlet; one incapable of action, in an oppressive Denmark, which is the cause of his inability to endure the cruel pressures of the world. Hamlet's emotions and morals are punished by a callous, mechanical, and corrupt system, and as 'Goethe' so rightly says, Hamlet has "a lovely pure and most moral nature, without the strength of nerve which forms a hero". ...read more.