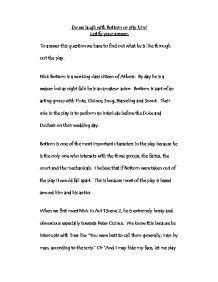 Do we laugh with Bottom or pity him?

Do we laugh with Bottom or pity him? Justify your answer. To answer this question we have to find out what he is like through out the play. Nick Bottom is a working class citizen of Athens. By day he is a weaver but as night falls he is an amateur actor. Bottom is part of an acting group with Flute, Quince, Snug, Starveling and Snout. Their role in the play is to perform an interlude before the Duke and Duchess on their wedding day. Bottom is one of the most important characters in the play because he is the only one who interacts with the three groups, the fairies, the court and the mechanicals. I believe that if Bottom were taken out of the play it would fall apart. This is because most of the play is based around him and his antics. When we first meet Nick in Act 1 Scene 2, he is extremely bossy and obnoxious especially towards Peter Quince. ...read more.

He also solves the problem of how to represent a wall. At the end of the scene Bottom has his head changed into an a***s head, this is a crucial part of the play as the next act relies on it. Snout says "O Bottom, thou art changed. What do I see on thee?" Bottom replies "What do you see? You see an a*s head of your own do you?" This is extremely ironic because Bottom has an a*s head. After this Bottom's friends run away from him, he sings to comfort himself, is he insecure? Also Bottom meets Titania and the fairies in this scene, at first he seems wary of these magical creatures but he soon gets used to them. By Act 4 Scene 1 Bottom has made the most of his fairy servants, getting them to scratch him and bring him food . I think he would act like a Shakespearian Del Boy; using the occasional wrong word and speaking in French with bad pronunciation trying making it look like he is intelligent, when really is a normal working class man. ...read more.

During the play there are a lot of parts where we laugh with Bottom and pity him. The main part where we laugh with him is at the end whilst he is playing Pyramus. This is because he seems to be having fun so laughing at him doesn't make us, the audience, feel guilty. Laughing at him is also praise as the interlude is supposed to be a comedy. Admiration is felt for Bottom in Act 3 Scene 1 because he has found problems with the play and come up with how to solve them at the same time. For instance the play will be shown inside and moonlight wont be able to shine in, so Bottom tells them that a man should represent it. In Act 5 Scene 1 we also pity Bottom because the court constantly making fun of him and the rest of the cast even though all of them are in ear shot. Over all I think that we laugh with Bottom and not pity him during A Midsummer Night's Dream. Tristan Hyde 10Ck ...read more.