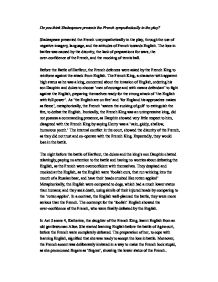 Do you think Shakespeare presents the French sympathetically in the play?

Do you think Shakespeare presents the French sympathetically in the play? Shakespeare presented the French unsympathetically in the play, through the use of negative imagery, language, and the attitudes of French towards English. The loss in battles was caused by the disunity, the lack of preparations for wars, the over-confidence of the French, and the mocking of tennis ball. Before the Battle of Harfleur, the French defences were asked by the French King to reinforce against the attack from English. The French King, a character with apparent high status as he was a king, concerned about the invasion of English, ordering his son Dauphin and dukes to choose 'men of courage and with means defendant' to fight against the English, preparing themselves ready for the strong attack of 'the English with full power'. ...read more.

Metaphorically, the English were compared to dogs, which had a much lower status than humans; and they seek death, using simile of their injured heads by comparing to the 'rotten apples'. In a contrast, the English well-planned the battle, they were more serious than the French. The contempt for the 'foolish' English showed the over-confidence of the French, who were finally defeated by the English. In Act 3 scene 4, Katherine, the daughter of the French King, learnt English from an old gentlewoman Alice. She started learning English before the battle of Agincourt, before the French were completely defeated. The preparation of her, to cope with learning English, signified that she was ready to accept the loss in battle. Moreover, the French accent was deliberately imitated in a way to make the French look stupid, as she pronounced fingers as 'fingres', showing the lower status of the French.. ...read more.

play a set strike his father's crown into the hazard'. Metaphorically, he used tennis b***s instead of cannons, he declared war to France. In addition, in Act 4 scene 5, after the French were completely defeated, the Duke of Bourbon repeated shame three times, as he said 'shame and eternal shame, nothing but shame.' The French were shamed as they were outnumbered the English but still lost in the battle. The repetition of shame emphasized on the shame of the French. Shakespeare presented the French unsympathetically; instead, Shakespeare presented war sympathetically. In Act 3 scene4, the imagery of horror is depicted vividly, 'The blind and b****y soldier with foul hand' if not opening the gates of Harfleur, contrasting with 'Your fresh fair virgins and your flowering infants' if opening the gates. The horror image is enhanced by the alliteration of repeated 'b' sounds and the fair image is enhanced by the alliteration of repeated 'f' sounds. Also, by contrasting the two, the horror image is reinforced the horridness. ...read more.