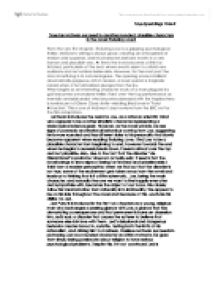 Does Ian McEwan succeed in creating rounded, plausible characters in the novel Enduring Love? From the very first chapter, Enduring Love is a gripping psychological thriller. McEwan's writing is always good, creating an atmosphere of tension and suspense, and his characters behave mostly in a very human and plausible way. At times the story becomes a little far fetched, particularly at the end, where events seem to unfold very suddenly and not entirely believably. However, for the most part the story is horrifying in its convincingness. The opening scene is brilliant; cinematically gorgeous, rich in tension, a lover's picnic is tragically ruined when a hot air balloon plunges from the sky. What begins as an interesting character study of a man plagued by guilt becomes a mundane thriller. Ifans' over-the-top performance as mentally unstable zealot who becomes obsessed with the hapless hero is reminiscent of Glenn Close's knife-wielding jilted lover in "Fatal Attraction." ...read more.

Joe, being the main character, and naturally the one we want to live happily ever after and sympathise with, becomes the object of our focus. We closely follow his transformation from rationality into irrationality. We appear to be on his side throughout the novel and because of this, we share his dislike for Jed. Jed Parry is introduced in the first two chapters as a young, religious man who exchanges a passing glance with Joe, a glance that has devastating consequences and that permanently burns an obsession into Jed's soul, a disorder that causes the sufferer to believe that someone else is in love with them. Jed's delusional and dangerous behavior creates havoc in Joe's life, testing both the limits of his rationalism, and driving him to madness. I believe McEwan succeeds in portraying Jed as a rounded character as within moments, he goes from simply being passionate about religion to have serious psychological problems. ...read more.

There is a contrast in the presentation of Joe's partner in the novel and the film interpretation. She appears to have a more active role in the film version as she seems to be more complex; showing both sides of normality and power. In the novel, Clarissa represents normality much more than the others therefore making her seem plausible. However we don't see her in depth, perhaps making her schematic. Judging by the book, I think McEwan creates a simplistic character for Clarissa who can be referred back to as the ordinary, typical middle aged woman in contrast to Joe and Jed. To conclude, I think McEwan cleverly begins the novel with a riveting, out of the ordinary situation arising with only the help of a group of very different, but appear to be relatively conventional people. However as the story unfolds, we see the normality fading and new, more complex characters emerging. I think Enduring Love is plausible right up into the end but arguably has a few far fetched concepts. ?? ?? ?? ?? Faye Speddings 12AAR ...read more.