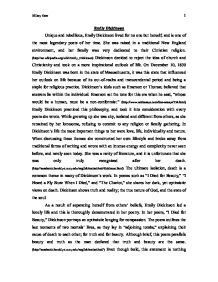 Emily Dickinson Unique and rebellious, Emily Dickinson lived for no one but herself, and is one of the most legendary poets of her time. She was raised in a traditional New England environment, and her family was very dedicated to their Christian religion. (http://en.wikipedia.org/wiki/Emily_Dickinson) Dickinson decided to reject the idea of church and Christianity and took on a more inspirational outlook of life. On December 10, 1830 Emily Dickinson was born in the state of Massachusetts, it was this state that influenced her outlook on life because of its out-of-realm and transcendental period and being a staple for religious practice. Dickinson's idols such as Emerson or Thoreau believed that answers lie within the individual. Emerson set the tone for this era when he said, "whose would be a human, must be a non-conformist." (http://www.antiessays.com/free-essays/354.html) Emily Dickinson practiced this philosophy, and took it into consideration with every poem she wrote. While growing up she was shy, isolated and different from others, as she remained by her lonesome, refusing to commit to any religion or family gathering. In Dickinson's life the most important things to her were love, life, individuality and nature. When discussing these themes she constructed her own lifestyle and broke away from traditional forms of writing and wrote with an intense energy and complexity never seen before, and rarely seen today. She was a rarity of literature, and it is unfortunate that she was only truly recognized after her death. ...read more.

(http://www.sparknotes.com/poetry/dickinson/section8.rhtml) The final stage of the dying process is the first witness of death in the scene "himself": "For that last onset, when the king Be witnessed in his power."(Dickinson) The King, although thought upon as Christ, could also symbolize death overpowering the room and claiming the life of the victim. Either way looked at, the King is the one to claim a life, and perhaps the speaker recognizes the eagerness of his or her loves ones to "witness" the "king" in his power, and welcome the inevitable. The completion of personal business as an important part of the dying process is then considered. She has made a last will and testament, giving "keepsakes," or possessions, away to relatives and friends. This is the dying person's request for the memorial ceremony and disposal of the body. (http://www.answers.com/topic/i-heard-a-fly-buzz-when-i-died-poem-3) These acts have more to do with the needs of the living than the needs of the dead, and yet they are commonly accepted and widely expected rituals of death and dying in society. In the midst of all this business activity, "there interposed a fly." Could Dickinson be mocking society? All the importance of ensuring proper rituals are met for the now deceased body, and a simply fly distracted her? The color blue is considered Dickinson's symbol for eternity. (http://www.123helpme.com/preview.asp?id=105191) At the end of the poem, perhaps it is used ironically because the fly, as a creature that lays its eggs in dead flesh, it is creating life yet again in that flesh, and continuing the eternal life within this flesh. ...read more.

In her work such as "I Died for Beauty", "I Heard a Fly Buzz When I Died", and "The Chariot", death is explained, contemplated, and questioned; however, the reader is never left puzzled. Emily Dickinson had many tragic life experiences that influenced her poetry and caused her to commonly write upon the theme of death. Dickinson's life was marked by a succession of deaths, which caused her to spend the later half of her life in sorrow. Although Emily Dickinson wrote about death, she often times wrote about it in peculiar ways such as death as being eternal and continuous but also immortality as a state of consciousness in an eternal present. (http://www.associatedcontent.com/article/59490/a_close_analysis_of_major_themes_in.html?cat=10) As society reads her old form of poetry, and historical way of language, we look back on their modernism as a fossil. Her work will continue to be legendary and stimulating, more than the incomparable synthesis of uncontrolled imagination and superior logic, and more than her fully-concentrated form. (http://www.svestdijk.nl/emilydickinson/essay-translated.html) She combines her words to produce a refined and sharply delineated vision with great complexity, resulting in the poems that society now hears today. Dickinson had unique and realistic views on life and death, and through her poems she informed everyone else of her thoughts. "Great poetry needs no special features of difficulty to make it mysterious". (Allen Tate, 16) Emily Dickinson is no exception of this statement as her simplicity is what made her great. Emily Dickinson's works contain deep emotion and her words will continue to amaze those that have the privilege of reading her poetry. ?? ?? ?? ?? Hillary Geer 1 ...read more.