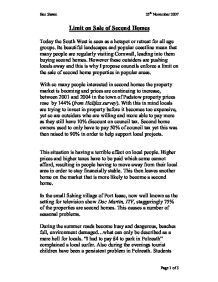 Limit on Sale of Second Homes Today the South West is seen as a hotspot or retreat for all age groups. Its beautiful landscapes and popular coastline mean that many people are regularly visiting Cornwall, leading into them buying second homes. However these outsiders are pushing locals away and this is why I propose councils enforce a limit on the sale of second home properties in popular areas. With so many people interested in second homes the property market is booming and prices are continuing to increase, between 2001 and 2004 in the town of Padstow property prices rose by 144% (from Halifax survey). With this in mind locals are trying to invest in property before it becomes too expensive, yet so are outsiders who are willing and more able to pay more as they still have 10% discount on council tax. ...read more.

"I had to pay �4 to park in Polzeath" complained a local surfer. Also during the evenings tourist children have been a persistent problem in Polzeath. Students coming down for the summer to stay in their family or friends second homes are found congregated on the road and beach drinking, shouting and vandalising property, and this is on a nightly basis. To solve the problem nine police officers were stationed at Polzeath to patrol the evenings yet this was a waste of money and very annoying for local youths "When we wanted to hang out we would have to stand in a spotlighted area that the police had allocated, just because others were causing trouble" said a teenager from Polzeath. However when winter settles in they all return north leaving towns like Port Isaac and Polzeath to appear as 'ghost towns'. ...read more.

It would help by; firstly less second homes means more local homes at affordable prices, also larger population numbers would be maintained throughout the year and furthermore businesses would be able to have a longer season and provide jobs through the winter... And with all this gained we still don't loose our biggest input from tourism that helps keep our economy going. I'm not saying we stop the sale of second homes as we then would have a major fall in our economy but if we limit the number of second homes available locals will have a better lifestyle which they are entitled to and outsiders will still have the option to move here. Limiting second homes in popular areas also gives the chance to then develop housing in small areas for permanent residents but also second home owners and overall improve the economy of the South West. ?? ?? ?? ?? Ben Swain 25th November 2007 Page 1 of 3 ...read more.