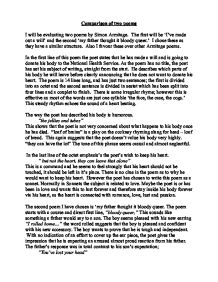 Comparison of two poems I will be evaluating two poems by Simon Armitage. The first will be 'I've made out a will' and the second 'my father thought it b****y q***r.' I chose these as they have a similar structure. Also I favour these over other Armitage poems. In the first line of this poem the poet states that he has made a will and is going to donate his body to the National Health Service. As the poem has no title, the poet has set his subject of writing, straight from the start. He describes which parts of his body he will leave before clearly announcing that he does not want to donate his heart. The poem is 14 lines long, and has just two sentences; the first is divided into an octet and the second sentence is divided in sestet which has been split into four lines and a couplet to finish. There is some irregular rhyme; however this is effective as most of the words are just one syllable 'the face, the case, the cogs.' ...read more.

The second poem I have chosen is 'my father thought it b****y q***r. The poem starts with a course and direct first line, "b****y q***r," This sounds like something a father would say to a son. The boy seems pleased with his new earring "I rolled home..." the word rolled suggests that the boy is pleased and confident with his new accessory. The boy wants to prove that he is tough and independent. With no indication of an effort to cover up the ear piece, the poet gives the impression that he is expecting an amused almost proud reaction from his father. The father's response was in total contrast to his son's expectation; "You've lost your head" The dad is insulting and sarcastic and seems unforgiving. The father mockingly says, 'you should've had it through your nose instead" Farm animals such as cows often have there noses pierced. Perhaps the father is associating the boy's earring with the ugliness of the cows'. The dad knows the youngster will regret it. ...read more.

The boy faces a dilemma; by taking out the ear piece is an admission of his mistake in putting it in; however by leaving it in, the son is disobeying his father which could cause more confrontation in the future. The poems have many similarities. Both of the poems are sonnets, the first is more traditional and has 14 and the second has 15 which is a adaptation on this idea. In both of the poems the poet is putting a strong message across. In the first, I feel that he is declaring the importance of love and passion and how they should never be forgot or left behind due to circumstance. In the second he is stating that you may disagree with someone's decision initially, however once the tables are turned and you look at the situation from the opposite perspective, and you should appreciate and understand the other point of view. Both the poems are easy to read as the rhythm of the poems are steady. Both of the poems have a light hearted feel. In the first, the poet describes his body in abnormal ways, in the second the regular rhyme lifts the poem and helps the poem to flow. ...read more.