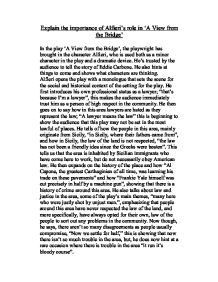 Explain the importance of Alfieri's role in 'A View from the Bridge' In the play 'A View from the Bridge', the playwright has brought in the character Alfieri, who is used both as a minor character in the play and a dramatic device. He's trusted by the audience to tell the story of Eddie Carbone. He also hints at things to come and shows what characters are thinking. Alfieri opens the play with a monologue that sets the scene for the social and historical context of the setting for the play. He first introduces his own professional status as a lawyer; "that's because I'm a lawyer", this makes the audience immediately trust him as a person of high respect in the community. ...read more.

He then expands on the history of the place and how "Al Capone, the greatest Carthaginian of all time, was learning his trade on these pavements" and how "Frankie Yale himself was cut precisely in half by a machine gun", showing that there is a history of crime around this area. He also talks about law and justice in the area, some of the play's main themes, "many here who were justly shot by unjust men.", emphasizing that people around this area have never respected the law of the land, and more specifically, have always opted for their own, law of the people to sort out any problems in the community. ...read more.

"He worked on the piers when there was work, he brought home his pay, and he lived." This is showing the audience that Eddie is an average, working man. Alfieri then moves time on "And toward ten o' clock of that night". This is using Alfieri again, as a dramatic device, in a different way, now he is showing a progress in time, so it is clear to the audience that time has passed. He then exits, and the scene goes on. Next time he is seen is after the cousins have become acquainted with everyone. He now hints that there may be some trouble coming with these new arrivals "there was a trouble that would not go away" This is affirming the audiences suspicions that have spawned from the tensions in the previous scene. ...read more.