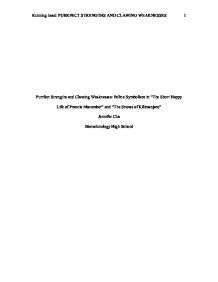 Feline Symbolism in The Short Happy Life of Francis Macomber and The Snows of Kilimanjaro by Ernest Hemingway.

64). Both felines are used to emphasize the main characters' strengths and weaknesses in Hemingway's short stories. Francis Macomber, from Hemingway's "The Short Happy Life of Francis Macomber," possesses none of the lion's aforementioned traits. He is weak, passive, and non-aggressive. Macomber's wife Margot controls him by putting him down and abusing Macomber with words. Margot tells Macomber that she is embarrassed of him because he acted like a coward. Her face turns red, but not red from drunkenness like the men; it turns red due to embarrassment (Hemingway, 1987, p. 6). Due to his fear, Francis Macomber could not finish killing the lion and ran away "running wildly in panic toward the stream" (Hemingway, 1987, p. 17). His anxiety made him sick and nauseous. Macomber feels inadequate because of his apprehensions and fearfulness. As a result, Margot commits adultery frequently knowing he would never leave her because of his insecurities. Macomber's shy and insecure demeanor is the complete opposite of the strong lion in the story. When Macomber neared it with a gun, the lion stood its ground and was not afraid. ...read more.

Compie, the pilot, flies Harry to the peak of Mount Kilimanjaro, so Harry could reach the top as he had aspired (Hemingway, 1987, p. 56). Harry surpasses the leopard and dies finally attaining courage and free of his regrets. On the whole, Francis Macomber's cowardliness is amplified by the presence of the powerful lion in the story. Harry's inadequacy towards reaching his goals is amplified by the presence of the aspiring leopard in the story. Macomber lacks power, which the lion symbolizes; Harry lacks courage, which the leopard symbolizes. Nevertheless, at the end of each story, both protagonists gain what they had wanted most. For Macomber, it was the power and strength he never had, especially over his wife. He gains the confidence to be imperious and that leads to his happiness. For Harry, it was the bravery to achieve his ambitions. All his life, he had felt laughable and cowardly, but he starts taking on his objectives and reaches the top of Mount Kilimanjaro as he had aspired. The lion and the leopard are used to enhance specific traits and to reveal how these traits transform in the main characters of Hemingway's short stories "The Short Happy Life of Francis Macomber" and "The Snows of Kilimanjaro. ...read more.