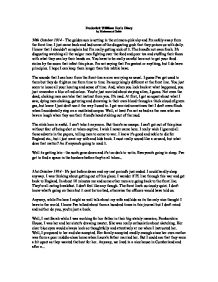 Frederick William Fea's Diary by Mohammed Bakir 30th October 1914 - The golden sun is setting in the crimson-pink sky and I'm safely away from the front line. I just came back and had some of the disgusting grub that they poison us with daily. I know that I shouldn't complain but I'm really getting sick of it. The bread's not even fresh. It's disgusting watching all the vulgar men fighting over the food and poor tea and stuffing their faces with what they can lay their hands on. You have to be really careful here not to get your food stolen by the scum that infest this place. I'm not saying that I'm genteel or anything, but I do have principles. I hope I can keep them longer than this rabble have. The sounds that I can hear from the front-line are as worrying as usual. ...read more.

I can't get out of this place without fear of being shot or taken captive. I wish I never came here. I really wish I ignored all those adverts in the papers, telling men to come to war. I know it's good and noble to die for England etc., but i just want my wife and kids back. I must really sound like a coward, but what does that matter? As if anyone's going to read it. Well its getting late - the sun's gone down and it's too dark to write. Everyone's going to sleep. I've got to find a space in the bunkers before they're all taken... 31st October 1914 - It's just before dawn and my rest period's just ended. I could hardly sleep anyway. I was thinking about getting out of this place. I wonder if I'll live through this war and get back to England. ...read more.

Anyway, we lived in a nice house in Cumberland and after a... They're calling for me. I'd better be off. Wish me luck. 1st November 1914 - Can't speak much. We're all going over the top in the morning and launch a surprise attack on the Germans. It doesn't look very hopeful. The Germans have got those big guns that shoot over a far range - forgot what they're called. We're all getting prepared and checked for anything wrong with out uniforms by the officers. It'll be my battalion's turn in a bit. I really don't want to do this. I hope I'll be able to see my wife and kids again. Then again, I might never even be able to write about them ever again. My head is aching. I can't concentrate very well. My hands are shaking and sweaty. I can't write anymore. I must leave you, my friendly journal. Hopefully I shall write in you again, but I forebode that Fate will not be so kind to me. Farewell. ...read more.